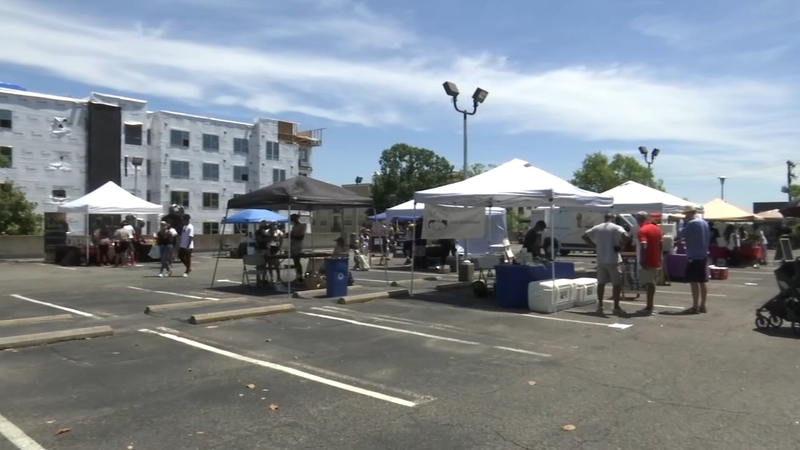 DURHAM, N.C. (WTVD) -- Hundreds of people waited in line to get into the Black Farmers Market Sunday in Durham.

"My business has gone up a thousand percent," said Chantel Johnson. "This year I was only supposed to raise 500 chickens and I'm already at 1,000. Business has been great because people are starting to trust Black people, believe that Black people are smart enough and we can raise good food."

Chantel Johnson, the owner of Off-Grid in Color, says it can be overwhelming to keep up with the demand but that she feels like her hard work is finally being recognized.

"I'm so happy," said Johnson. "I'm so happy. I've been working so hard the past four years to encourage people to eat clean meat and now I feel like I don't have to pull teeth, I don't have to explain to people why my chicken product is different from Tyson."

"I think we've always seen a lot of great support from the community," said Moses Ochola. "The biggest difference for us has been a lot of allyship with a lot of white people in the community and seeing that they also support Black businesses as well."

RELATED: People of all races gather to support black farmers in Durham

Ochola is one of the founders of the Black Farmers Market which began in 2018 as an annual event and now happens twice a month, once in Durham and once in Raleigh. He said they're averaging more than 1,000 people at each market.

"I think people are starting to educate themselves because of social issues that are happening and because of that we're seeing more of an outcome," Ochola said. "It's always been something that is needed. I hope this isn't a trend and it continues to build."

Kenia Sloan, a vendor at the market, said when she first arrived to the event, the line was wrapped around the entire building noting that it was not like this last year.

"Obviously the word is getting out and the support is growing for Black businesses," Sloan said.

The market had around 30 vendors as 5 food trucks bringing people together from all backgrounds to one place to show community support.

"Now that more people are becoming more aware that there are Black businesses out there," Sloan said. "I didn't realize there were Black farmers until last year. I think it's extremely important that we support our Black businesses."