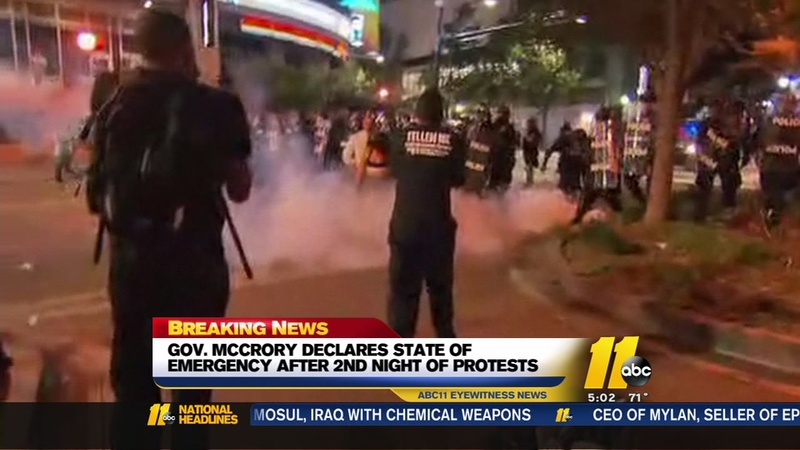 CHARLOTTE (WTVD) -- Charlotte Mayor Jennifer Roberts told ABC's Robin Roberts Thursday morning that a curfew is being discussed after a second night of violence in the city. Gov. Pat McCrory has declared a State of Emergency at the request of Charlotte Mecklenburg Police Chief Kerr Putney. The governor has sent in the North Carolina National Guard and the State Highway Patrol to assist local law enforcement.

Charlotte officials said a man shot during a protest is in critical condition and on life support. Earlier, city officials reported the man had died. The city of Charlotte made both announcements Wednesday night on its Twitter feed.

The man was shot at N College Street and E Trade Street, a security expert said, during a second night of unrest in Charlotte. The shooting was between two civilians and did not involve police, a city official said.

The security expert, Ross Bulla, was with WSOC reporter Paul Boyd at the scene.

Bulla heard the gunshot near the Epicentre and went to perform first aid to the person, who he said was a black man.

Firefighters rushed in to pull the wounded man to a waiting ambulance.

Officers on bicycles surrounded a pool of blood on the ground and a few people threw bottles and clods of dirt at police.

The tense standoff continued as police fired small canisters of tear gas into the protesters.

McCrory, a former mayor of Charlotte, issued a statement Wednesday night on the unrest in the state's largest city.

"I want to assure the people of North Carolina that our SBI has already been assisting the Charlotte Mecklenburg Police Department throughout the last 24 hours. Upon a very recent request of Chief Putney, the State Highway Patrol is sending in troopers to further help the Charlotte Mecklenburg Police Department. The state has many additional assets nearby to assist. Any violence directed toward our citizens or police officers or destruction of property should not be tolerated. I support and commend the law enforcement officials for their bravery and courage during this difficult situation."

The Charlotte Hornets told WSOC their team store was broken into and looted during the rioting.

Authorities tried to quell public anger and correct what they characterized as false information Wednesday after a night of looting and arson added Charlotte to the list of U.S. cities that have erupted in violence over the death of a black man at the hands of police.

With officials refusing to release any video of the shooting of 43-year-old Keith Lamont Scott, two starkly different versions emerged: Police say Scott disregarded repeated demands to drop his gun, while neighborhood residents say he was holding a book, not a weapon, as he waited for his son to get off the school bus.

The killing inflamed racial tensions in a city that seemed to have steered clear of the troubles that engulfed other places.

As Charlotte's white mayor and black police chief stood at City Hall and appealed for calm, African-American leaders who said they were speaking for Scott's family held their own news conference near where he was killed on Tuesday, reminding the crowd of other shootings and abuses of black men.

John Barnett, who runs a civil rights group called True Healing Under God, or THUG, warned that the video might be the only way for the police to regain the community's trust: "Just telling us this is still under investigation is not good enough for the windows of the Wal-Mart," a reference to the damage to a store in Tuesday night's rioting.

"What happened last night is disheartening," Walmart spokesperson Erica Jones told ABC11. "We're glad all of our associates are safe. We're continuing to work with police to follow the situation and determine when our store will re-open."

On Tuesday night, a protest near the apartment complex where the shooting took place turned violent. Dozens of demonstrators threw rocks at police and reporters, damaged squad cars, closed part of Interstate 85, and looted and set on fire a stopped truck. Authorities used tear gas to break up the protests. Sixteen officers suffered minor injuries. One person was arrested.

The violence broke out shortly after a woman who appeared to be Scott's daughter posted a profanity-laced, hour-long video on Facebook, saying her father had an unspecified disability and was unarmed. In the footage, she is at the cordoned-off shooting scene, yelling at officers.

"My daddy is dead!" the woman screams on the video, which has not been authenticated by The Associated Press.

On Wednesday morning, Charlotte-Mecklenburg Police Chief Kerr Putney said: "It's time to change the narrative, because I can tell you from the facts that the story's a little bit different as to how it's been portrayed so far, especially through social media."

The police chief said officers were serving arrest warrants on another person when they saw Scott get out of a vehicle with a handgun. A black plainclothes officer in a vest emblazoned "Police" shot Scott after the officer and other uniformed members of the force made "loud, clear" demands that he drop the gun, the chief said.

Putney was adamant that Scott posed a threat, even if he didn't point his weapon at officers, and said a gun was found next to the dead man. "I can tell you we did not find a book," the chief said.

RELATED: PROTESTS AT NCCU, OTHER HBCUS OVER CHARLOTTE SHOOTING

Neighbors, though, claimed that the officer who fired was white and that Scott had his hands in the air.

The three uniformed officers had body cameras; the plainclothes officer did not, police said. But the chief said he cannot release the video because the investigation is still underway. No cellphone video has emerged on social media, as happened in other cases around the country.

The plainclothes officer, identified as Brently Vinson, a two-year member of the department, has been placed on leave, standard procedure in such cases.

Just in... the wife of #KeithScott released this statement. Asks for no law enforcement officers to be harmed @wsoctv pic.twitter.com/H1Iq4doGsb

Scott's mother described her son as a family man.

"And he was a likable person. And he loved his wife and his children," Vernita Walker told The Charlotte Observer.

Scott has a lengthy criminal record, including convictions in Texas, North Carolina and South Carolina. Texas records showed he was convicted of evading arrest with a vehicle in 2005, and several months later, of aggravated assault with a deadly weapon.

The unrest took many by surprise in Charlotte, the banking capital of the South with a population of 830,000 people, about 35 percent of them black. The city managed to pull through a racially charged shooting three years ago without the unrest that erupted in recent years in such places as Baltimore, Milwaukee and Ferguson, Missouri.

In 2013, Charlotte police charged one of their own, Randall Kerrick, with voluntary manslaughter days after the white officer shot an unarmed black man who had been in a wreck and was looking for help. The jury deadlocked and the charge was dropped last summer. There were a few protests but no violence.

At the apartment complex where Scott was killed, some people who said they witnessed the shooting told their version with an air of certainty even when they were hundreds of yards away.

Taheshia Williams said her balcony overlooks the shady parking spot where Scott was Tuesday afternoon. She said he often waited there for his son because a bicycle accident several years ago left him stuttering and susceptible to seizures if he stayed out in the hot sun too long.

On Tuesday, she said, Scott had only a book in his hands and was following orders.

"He got out of his car, he walked back to comply, and all his compliance did was get him murdered," Williams said.

The American Civil Liberties Union urged the police chief to release the video. And some leaders called for a black boycott of Charlotte.

"Since black lives do not matter for this city, our black dollars shouldn't matter," said B.J. Murphy, a radio host and leader of the Nation of Islam.