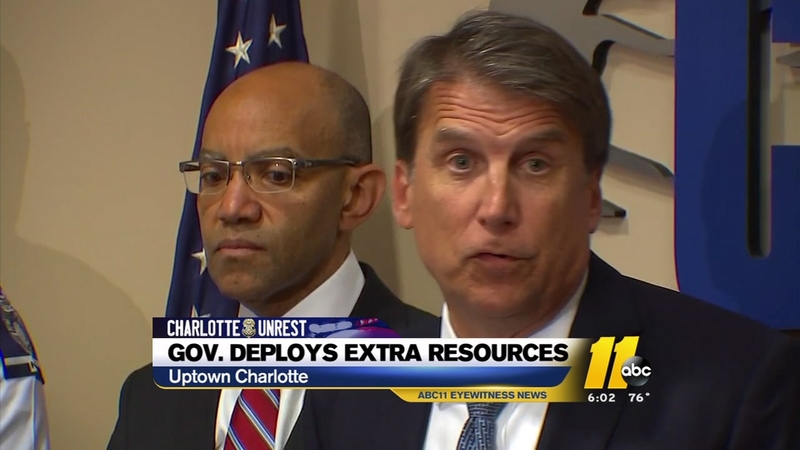 CHARLOTTE (WTVD) -- North Carolina Gov. Pat McCrory refused to disclose the amount of extra resources that will be provided to Charlotte after two nights of violent protests, saying in part that he doesn't want to jeopardize safety. He said that the State Bureau of Investigation has initiated an independent investigation into the officer-involved shooting.

McCrory addressed the volatile situation in Charlotte on Thursday afternoon, just hours after city officials debriefed the public on the officer-involved shooting that sparked violence in the Queen City.

"As we continue to monitor the situation here today, I have assured the mayor and the Charlotte-Mecklenburg Police Department that the state will continue to offer any and all support necessary to protect property and most importantly our citizens," McCrory said.

McCrory, who declared a State of Emergency on Wednesday night about 11 p.m. at the request of Charlotte-Mecklenburg Police Chief Kerr Putney, also condemned the violence that has plagued the city.

"I want to reiterate that any violence directed toward our citizens or police officers or destruction of property will not be tolerated," McCrory said. "By working together, I am confident in our ability to support local efforts to restore Charlotte to peace and prosperity."

"I also continue to pray for our city and state, and for the family of Mr. Scott." the governor added.

McCrory also spoke to President Barack Obama on Thursday. A White House spokesman told ABCNews that the president offered condolences to those mourning the loss of loved ones. He also stressed that the protests should be peaceful without vandalism or violence.

"The president is certainly aware of what's happening and has been in close touch with local officials," said Josh Earnest, White House press secretary.

McCrory said he "had a very nice conversation" with Obama.

"I want to thank the president for offering his assistance and listening to some of the challenges that we're facing right now in Charlotte," McCrory said.

"The events we saw last night are not the Charlotte that I know and love," she said.

Police Chief Kerr Putney said five officers and nine civilians were hurt Wednesday night. Another protester was shot and has life threatening injuries in what officials are calling a civilian on civilian shooting.

As officials tried to quell the unrest, Roberts told reporters that Charlotte was "open for business," but at least three major businesses were asking their employees to stay home for the day as the city remained on edge. Roberts told ABC's Good Morning America earlier that officials were considering a curfew.

Putney once again Thursday refused to release any video of the shooting of 43-year-old Keith Lamont Scott. That has led to two starkly different versions of how he died: Police say Scott disregarded repeated demands to drop his gun, while neighborhood residents say he was holding a book, not a weapon, as he waited for his son to get off the school bus.

Putney said he has reviewed video of the shooting and what he saw does not give absolute definitive proof that Scott was pointing a gun, but Putney said it does support what has been reported that Scott was armed and did not follow repeated commands to put it down.

It's not clear what the body cameras worn by three officers who were present during the shooting may have captured. The plainclothes officer who shot Scott, Brently Vinson, was not wearing a camera. He has been placed on leave, standard procedure in such cases. Vinson is black.

The streets were mostly quiet Thursday, but Bank of America, Wells Fargo and Duke Energy all told employees not to venture into downtown after Gov. Pat McCrory declared a state of emergency Wednesday night and called in the National Guard after the police chief said he needed the help. The North Carolina National Guard arrived at a Charlotte armory early Thursday, and Guard vehicles left the armory about 8 a.m.

"I wanted to protect our property and our people," said Putney.

"We had a lot of looting and our intent is to protect those assets," he said.

Federal help also is on the way, with the Justice Department sending to Charlotte a team of trained peacekeepers designed to help resolve community conflict. The department's Community Relations Service has been deployed to other cities roiled by tense flare-ups between police and residents.

A peaceful prayer vigil Wednesday night turned into an angry march and then a night of violence after a protester was shot as people charged police in riot gear trying to protect an upscale hotel in Charlotte's typically vibrant downtown. The city originally said the protester was killed in the shooting but later said he was on life support.

Police have said they did not shoot the man, but Putney said there have been allegations an officer may have been involved.

"We are investigating that to find the truth," he said.

On Thursday evening, WSOC reported that the protester shot, identified as Justin Carr, had died from his injuries.

Putney said there have been more than 40 arrests and investigators will be reviewing video of the violence with an eye to find more of those responsible.