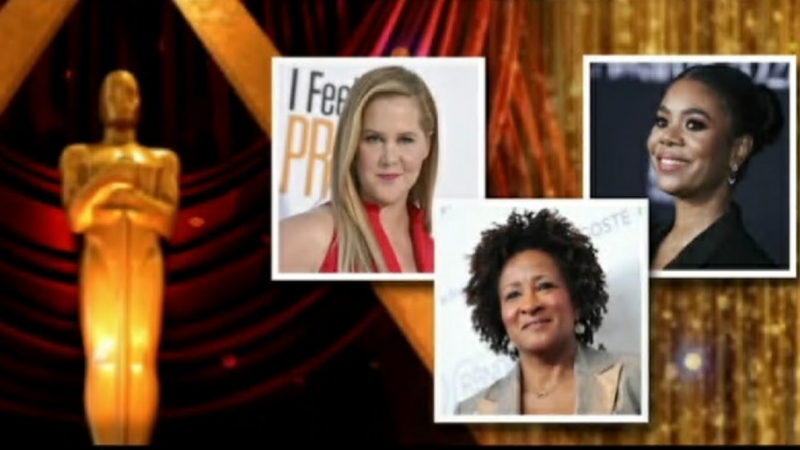 LOS ANGELES -- This year's Oscars ceremony will break barriers in more ways than one with a series of historic firsts.

If the past is any guide, "CODA" is now the heavy favorite to take home Oscar's top prize and be named Best Picture on Sunday, March 27.

That's because the coming-of-age film won the top award from the Producers Guild of America, and just last year, "Nomadland" won the PGA Award first, before being called the best movie of the year on Oscar night.

It's fitting that a film about a child of deaf adults be among the top contenders because the Academy Awards are all about breaking barriers this year.

Lin-Manuel Miranda sat down with On The Red Carpet to share how "Encanto" exemplifies the power of being seen and heard.

To consider this year of 'firsts,' let's begin with the three Oscar hosts.

Never before have three women presided over the show, so the trio of Regina Hall, Wanda Sykes, and Amy Schumer are poised to make history.

"I'm so excited about the Oscars," Amy told Eyewitness News entertainment reporter Sandy Kenyon at the New York City premiere of her new Hulu series, "Life & Beth." "I'm just gonna do kinda no holds barred like go for it, you know, but within the law."

You may recall Hall was so funny on the big screen in "Girl's Trip," and she got recruited by that movie's producer, Will Packer, who's in charge of this year's Oscar show alongside producer Shayla Cowan, who explained to Kenyon via Zoom that, "to be able to see women together stand on the stage March 27th and literally be able to do what people know them for is so rewarding."

Cowan and Packer are breaking barriers themselves behind the scenes.

"Will and I are the first African American producing partners to produce this show in Oscar history," Cowan said.

Also making history are a diverse group of nominees. Ariana DeBose is the first Latina actress who identifies as LGBTQ+ to be recognized, and her nod for playing Anita in "West Side Story" comes half a century after Rita Moreno's historic win for the same part!

"Classics are meant to be re-told," said DeBose at the film's premiere. "That is what makes them classic, and you make them tangible by putting faces in front of an audience that they can relate to."

Oscar recognition for "CODA" makes Troy Kotsur the first deaf performer nominated for Best Supporting Actor, and he spoke movingly of his long struggle to make it as a performer before he won in that category at the Screen Actors Guild Awards.

Speaking through an interpreter he spoke to "On The Red Carpet."

Oscars show producer Will Packer told On The Red Carpet he wants to entertain audiences and elevate diverse voices at this year's ceremony.

"I felt this gut feeling something was pulling me forward that I couldn't ignore so I remained persistent and through the years I finally got to this point," Kotsur said.

Kenyon sat with Kotsur and co-star Marlee Matlin at the Oscar Nominees Luncheon in Los Angeles, and said it felt like a date with destiny because, after all, Matlin was the first deaf person to win an Oscar for "Children of a Lesser God."

Back in Manhattan, the National Board of Review Awards also seemed like an historic occasion-especially given the recognition for "Encanto" as Best Animated Film.

Stephanie Beatriz, who plays Mirabel, marveled that, "when I graduated from college, I don't think I could've imagined that the world would have a Disney film that would star someone who looked like me from where I'm from, and yet that exists now, and it's a real thing, and we're not going back."

"Encanto" earned Lin-Manuel Miranda and Oscar nomination in the Best Song category, and that has given him the chance to achieve what is sometimes called "the grand slam of show business." If he were to win then he'd be one of the few who have earned an Emmy, Grammy, Oscar, and Tony (known as EGOT)!