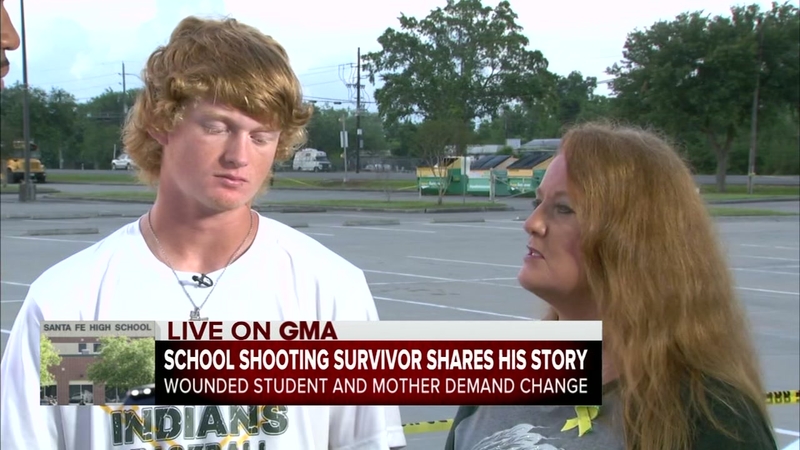 SANTA FE, Texas -- When gunfire erupted at Santa Fe High School on Friday, May 18, lives were forever changed. Sophomore baseball player Rome Shubert said the gunman walked into his classroom and tossed something onto desks. As Rome ran for his life, he later realized he'd been wounded.

"I was running and looked down and noticed there was blood on my shirt. I thought it was somebody else's but somebody told me I was actually shot in the back of the head," he recalled.

Rome was incredibly lucky. He was shot in the back of the head, but miraculously escaped major injury.

Despite his injury, the day after the shooting, Rome got back on the baseball field - with the initials of the victims on his arm.

"Just to show there's some light on this, kind of bring everybody up," he said. "Just give a little feeling of hope. I wanted to be out there with all my friends and show them I'm still here."

As the community struggles for answers, Rome's mother, Shari Shubert, had some strong words in the wake of the tragedy.

When asked if she ever thought this could happen here, she responded, "Sadly, I did. ... I feel like it's a pattern with these shootings, and nothing has changed after each one. The shooting happens, our thoughts and prayers are with you, we debate gun control, then we're numb and it goes away and there's another shooting."

Shari expressed the need to address mental illness and being there for one another, while "not ignoring those who seem like they need help."

During a live interview on 'Good Morning America,' Shari pressed on with the need for hands-on parenting.

"Know what your kid is doing. I know what my kid is doing," she said. "He is accounted for at all times. He has friends because I took him to parties and I did things with him. We know who he is and what he is about. I know what he is posting on social media. I know what Rome is doing. I am invested in Rome. Parenting is priority."
Report a correction or typo
Related topics:
santa fesanta fe high school shootingcommunity
RELATED
Survivor speaks about being shot in head at Santa Fe HS
SANTA FE HIGH SCHOOL SHOOTING
No federal charges for Santa Fe High shooting suspect
Santa Fe Strong Fund distributing $1.2M to shooting victims
Family of Santa Fe shooting victim Jared Black pens open letter
Justin Timberlake dedicates Houston show to Santa Fe
TOP STORIES
Bob Dole, longtime public servant and WWII veteran, dies
Friends mourn loss of Rolesville teen killed in hit and run
New details on violent drawings reported before MI school shooting
Chris Cuomo accused of sexual harassment days before CNN firing
Parents knowingly sent child with COVID to class, prompting quarantine
Mom shocked by Confederate flags in school library's Christmas book
Show More
Restaurant owner explains why cops were denied service amid backlash
Dunkin' customer surprises beloved employee with new home
Homeowner told to take down 'Christmas Vacation' display or face fines
Crumbley parents plead not guilty to Oxford school shooting charges
CNN fires Chris Cuomo following suspension, investigation
More TOP STORIES News