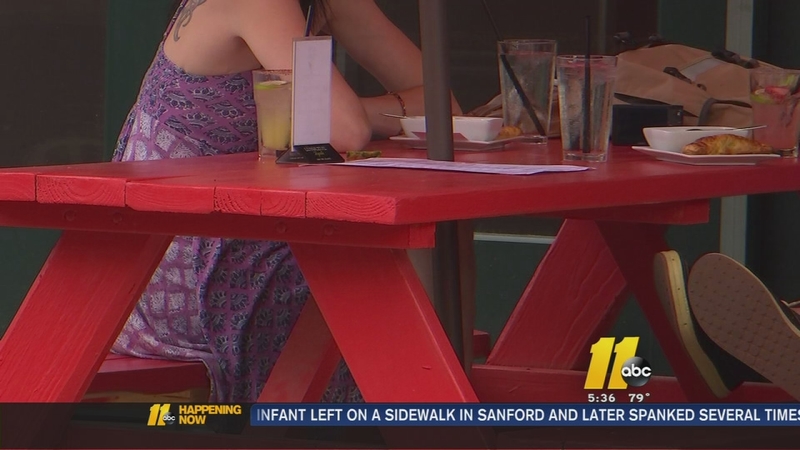 RALEIGH (WTVD) -- Raleigh City Council is weighing a proposal that could revoke patio permit for some downtown restaurants.

Council members said the change would impact the businesses that don't make at least 30-percent of their sales from food. They say they've received complaints recently about noise, cleanliness, and crowded sidewalks.

However, some business owners argue the bigger problem would be stripping growing businesses of outdoor space that brings people downtown.

Zack Medford just doesn't get it.

"It seems to me like a solution looking for a problem," he said.

Medford, who is the owner of three downtown Raleigh bars, is at a loss as to why city leaders would want to keep businesses from using patio space on its sprawling sidewalks that line Fayetteville street.

One of them is Medford's own pub with a view of the State Capitol.

"The name of the bar is Paddy O'Beers because we have this awesome patio," said Medford. "If we don't have access to this, we've only got 700 square feet inside.

Medford said he'd have no choice but to close if city council passes a revised "outdoor dining" ordinance.

Assistant City Manager Marchell Adams-David said staff members are just trying to get back to what the outdoor dining permits were originally intended for. She said some businesses have been misusing them-- even operating mini-bars on city sidewalks.

Medford's bar was one of them, but he said he received special permitting for a recent beer festival.

Only four days after launching an online petition to "Save the Patios," nearly 7,000 people have signed on to try to stop the city council from revoking permits.

"Raleigh's at a crossroads," said Adams-David. "Are we going to continue to be a sleepy Southern town? Or are we actually going to grow up and be a big city like the reputation that we've earned across the nation?"

City leaders said the changes only apply to use of public property. The revised ordinance would impact six businesses that currently hold an outdoor dining permit.