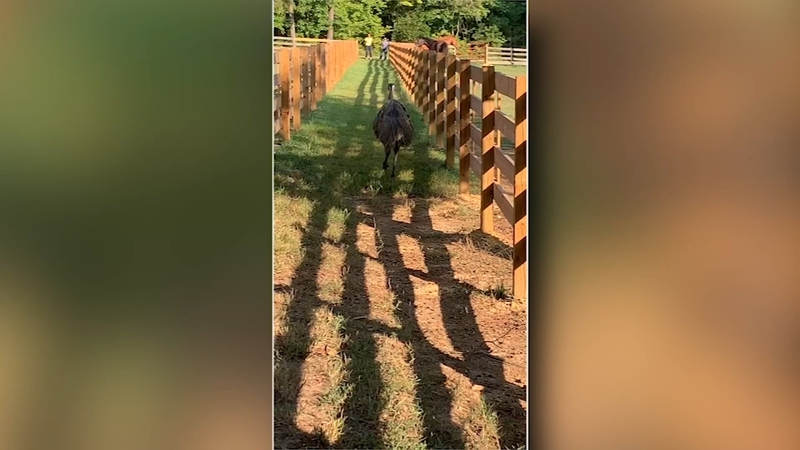 ORANGE COUNTY, N.C. (WTVD) -- Officials in Orange County need your help trying to find a criminal who has been evading arrest for weeks: Eno the Emu.

He has been spotted around the county for weeks. The bird has been seen a few times over the last few days.

He was seen again on Thursday near Orange Grove Road in Hillsborough.

Juliana Zunde said she saw Eno at Trakai Farm. He was looking at the horses.

One witness said he jumped on their car.

The flightless bird, who weighs roughly 100 pounds, has not been terrorizing citizens or damaging property; however, he is known to trespass.

"He apparently jumped on the hood of a car and then ran away," said Tenille Fox with Orange County Animal Services.

According to the New York Times, Eno -- or Fluffy as one resident called him -- was spotted in someone's yard back in June.

It is unclear to whom Eno belongs.

"We are sending out a plea. Please, if this is your emu, let us know," said Fox. "Please give us a call. We need more information about this animal and it might help with the capture."

Birds like Eno are able to move at speeds as fast as 30 miles per hour, making his capture even more difficult.

With that in mind, animal control has one message for residents: Don't try to capture him yourself.

"What we really need is for this emu to wander into an area that provides some sort of containment - such as natural barriers, a pasture, or some sort of fenced area," Fox said. "If the emu is in an area like that, an Animal Control team can try to block the animal off even more and hopefully corral the animal without causing further stress. We worry about causing more stress in this heat."

Officials believe Eno is very scared of people and other animals, so if you see him, keep your distance.