After Pfizer announces vaccine is safe for teens, Cary 12-year-old reflects on participation in trial 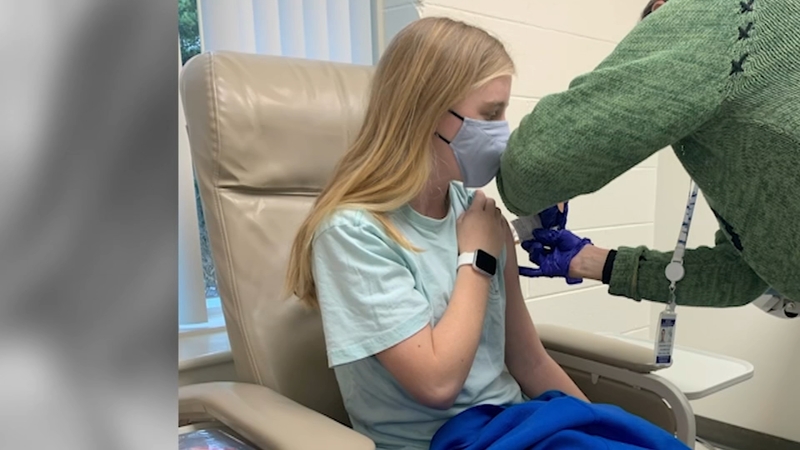 CARY, N.C. (WTVD) -- When given the choice, Sophie Holland decided to get the shot; two of them, actually, not knowing if they were Pfizer's mRNA vaccine or a placebo.

"After the second dose, I did get a little bit sick," said the Cary Academy 6th grader. "I had a fever and chills that night but it went away after one day."

What happens if you only get one shot of the Pfizer or Moderna vaccine?
EMBED More News Videos

Dr. David Wohl, an infectious disease expert at UNC, answers questions about COVID-19 and the vaccines.

When Pfizer opened its COVID-19 vaccine clinical trial to children 12 to 15 years old in January, Sophie's father, Dr. Thomas Holland, an infectious diseases professor at Duke University, asked his 12-year-old if she wanted to join the study.

"I'm used to going through informed consent with patients and Sophie was in a position to really read it carefully and go through and make her own decision," he said.

More than a month after her second dose, Sophie reports she's healthy and eager for what lies ahead after Pfizer released its preliminary findings.

In a study of 2,260 children in the U.S., 12 to 15 years old, Pfizer said its vaccine is 100% effective; data showing no COVID cases among those fully vaccinated compared to 18 among those given the placebo.

Walter said the study size was small but significant given the tens of thousands of adults already involved in Pfizer trials.

The side effects among kids is similar to those in adults, Walter said, showing the vaccine is not only effective but safe for children, and that's not all.

"Those children who were vaccinated had a really high level of protective antibody -- it was actually higher than that that was seen in the adult population," he said.

Walter said with Pfizer now seeking authorization for this younger age group, kids as young as 12 could have access to the vaccine sometime this summer, just before returning to school in the fall.

For Sophie, who's spent the last year social distancing in a mask, carrying on virtually with everything from school to music lessons, she hopes this means seeing her friends in the hallways at school once again.

"I want to know that I had that effect on people and people can get vaccinated and return to their normal lives because of something I participated in," she said.

Walter said in order to move forward from the pandemic, children would need to get vaccinated against COVID-19, a virus that's caused more deaths in the last year than any single flu season.

"In order to really achieve population-level protection it's suggested that we vaccinate about 75-80 percent of our population and children make up a large portion of that population," Walter said. "They're a really important component to help put this in the rear view mirror."

Dr. Holland, who often enrolls patients in clinical trials, said he decided to trust science with his own family.

"It's certainly natural to be hesitant and maybe have a little bit of worry about a new product," he said. "But I think that at this point, we've seen about a 100 million people just in the U.S. alone get vaccinated with one of the mRNA vaccines or the Johnson & Johnson vaccine and now we're seeing a safety database in kids as well. So I think we can feel really reassured that these vaccines are safe and they're effective in preventing COVID as well."
Report a correction or typo
Related topics:
health & fitnesscarynccoronaviruscovid 19 vaccinedukecovid 19
Copyright © 2022 WTVD-TV. All Rights Reserved.
COVID-19 VACCINE
Pfizer: COVID vaccine for kids 6 months to 5 years old 80% effective
Parents share mixed reactions over plans for boosters for children
CDC director signs off on booster shots for children ages 5 to 11
2 years into COVID-19, some remain in complete isolation
TOP STORIES
Heavy rain, winds knock down trees, power in parts of central NC
Durham police investigate fatal shooting, crash along NC 55
Congresswoman announces $3M for strollway between Chavis, Dix parks
Duke pediatrician warns about baby formula shortage impact
Homeless veterans get an assist from Durham's Rotary Club
Truck slams into NC woman's new home
Supreme Court ruling results in 'tragic loss' for death row inmates
Show More
Shelf cloud seen in Raleigh ahead of line of storms
New NC flood monitoring system ready for next big storm
Father puts 1,000 miles on his car to find specialty formula
Student says he was told not to mention 'Don't Say Gay' law in speech
Clayton police arrest man in shooting that injured 1
More TOP STORIES News