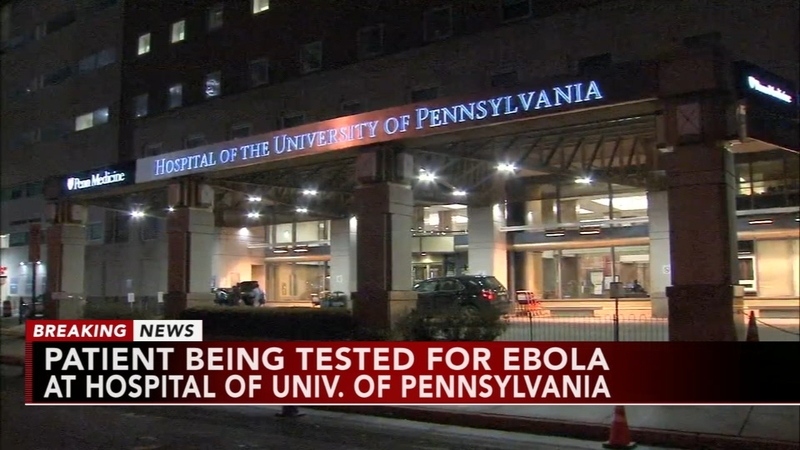 Patient being tested for Ebola at Hospital of University of Pa.

PHILADELPHIA, Pa. -- A patient is being tested for Ebola at the Hospital of the University of Pennsylvania in Philadelphia.

Penn Medicine confirmed to WPVI early Wednesday morning that a patient was tested for Ebola at the University City hospital.

But those tests and results are not yet completed.

According to Penn Medicine, in a statement, "a patient who met screening criteria for Ebola testing is currently being evaluated at HUP while tests to assess the patient's condition are completed."

However, Penn said preliminary testing indicated the patient has another condition, as well.

The statement, issued by Penn's chief medical officer Dr. PJ Brennan, said the test was administered in an abundance of caution.

At this time, we do not yet know if this patient had traveled to a location which has the disease, or came in contact with someone who does.

There is a current outbreak of Ebola in the African country of Congo.

"Proper protocols and precautions will remain in place to ensure the safety of all of our patients and staff," the statement read.

Tom Skinner of the Center for Disease Control confirmed the information given by Penn Medicine. Skinner added that additional testing would have to be completed 24 hours later to make sure that the earlier tests were correct and that the patient has or does not have the virus.

Clinical teams at the Hospital of the University of Pennsylvania have received extensive training and conduct ongoing preparations for the possibility of caring for a patient with the Ebola virus since the appearance of the virus in the United States in 2014. In an abundance of caution, a patient who met screening criteria for Ebola testing is currently being evaluated at HUP while tests to assess the patient's condition are completed. Preliminary testing indicates that the patient has another condition. Proper protocols and precautions will remain in place to ensure the safety of all of our patients and staff. We are not able to provide any additional information about the patient at this time due to privacy laws.


According to the Center for Disease Control, the Ebola virus spreads to people through direct contact with bodily fluids of a person who is sick with or has died from Ebola Virus Disease. This can occur when a person touches the infected body fluids (or objects that are contaminated with them), and the virus gets in through broken skin or mucous membranes in the eyes, nose, or mouth. The virus can also spread to people through direct contact with the blood, body fluids and tissues of infected fruit bats or primates. People can get the virus through sexual contact as well.

Symptoms include: fever, headache, joint and muscle aches, weakness, diarrhea, vomiting, stomach pain, lack of appetite, and abnormal bleeding. Symptoms may appear anywhere from 2 to 21 days after exposure to EVD though 8 to 10 days is most common.