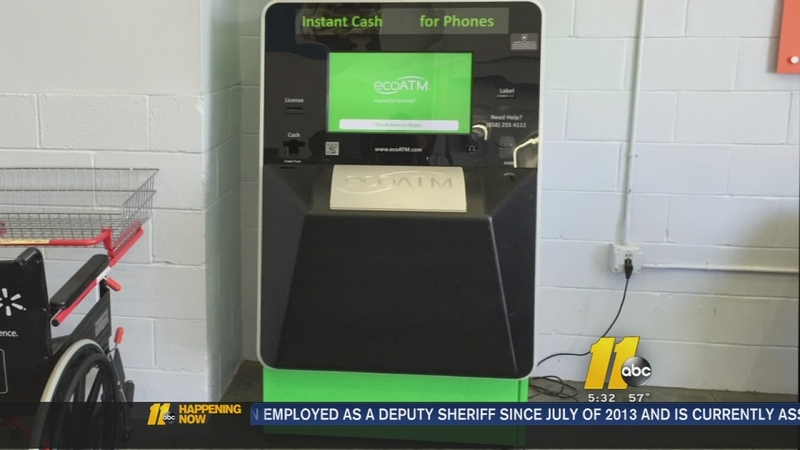 ROUGEMONT, NC (WTVD) -- ecoATMs are advertised as quick and easy way for you to get cash for your old phones or tablets, but some say the machines are causing more harm than good.

Carol Riggs found out about ecoATMs the hard way, right after her iPad was stolen.

WHAT TO DO IF YOUR DEVICE IS STOLEN

"My daughter used her iPhone and used her Find my iPhone app and so she said it's in Walmart in Mebane, which I've never been there in my life," Riggs said.

Confused, Riggs started to drive to Mebane to get her iPad back, but it wasn't that simple.

Riggs picked up her daughter and started following the iPad.

"It was already on the interstate going south." Riggs said.

When it finally came to a stop, they pulled up and discovered it was in an armored truck, so her daughter approached the driver.

"'You've got my mom's iPad in your truck and it was stolen and it's in your truck,' she said, 'maybe you picked it up at the Mebane in Walmart when you picked up their cash bag this morning,'" she said.

"Then he said, 'No it wasn't a cash bag. We go to recycle machines. They're called ecoATM machines and he said that's what we did there today,'" Riggs said.

Riggs then realized that whoever stole her iPad sold it to the ecoATM machine for some quick cash.

She said while the driver was nice to them, he couldn't give them the iPad due to the company's policy.

So they called ecoATM and they told them they could not open the bag the driver had.

"'The only thing you can do is go fill out a police report and then send that to me with all the serial numbers and I'll send you another form and then we'll get it back to you,'" Riggs said.

They were furious they would have to jump through many hoops to get their own stolen property back, so they reach out to me.

I contacted ecoATM who said they have security measures to prevent thieves from cashing in on stolen goods, like requiring sellers to provide a valid ID along with a thumbprint scan.

They also said the transaction will be declined if the ID doesn't match is invalid or if the person is under 18.

After looking into the multiple security measures ecoATM said they take when giving cash for electronic devices, we quickly found cases of alleged fraud with their machines.

Police provided us with these pictures from ecoATM and were able to track the girl down.

The 17-year-old is charged with a number of theft charges after police say she used a stolen ID and sold 26 stolen phones to ecoATM machines for cash.

Police in D.C. have called for ecoATMs to be banned because the machines say they attract, even encourage, criminal behavior.

The machines are banned in Baltimore in an effort to give thieves one less outlet to collect cash for stolen cell phones.

As for Riggs, she didn't want to wait for her iPad to make it to ecoATM Headquarters in California so she got the Orange County Sheriff's Office involved. A detective investigated and got in touch with EcoATM. If Carol would drive to Loomis Headquarters in Kernersville, NC, she said EcoATM would agree to give her back her stolen iPad. She made the trip, and is happy to be reunited with it.

Carol reunited with her iPad.

The detective tells me they caught the person who allegedly stole Riggs' iPad. The detective says the man worked at the grocery store where Riggs was shopping in when it was stolen. He has since lost his job. Riggs believed that was punishment enough and did not press charges.

ecoATM tells me that less than one percent of the phones they collect are stolen and that ID verification and human monitoring keeps most thieves away.

They said the law requires preservation of evidence, which is why people must jump through so many hoops to get their stolen merchandise back.

EcoATM said they run all devices of value through CheckMEND's national database at the point of sale to determine if a cell carrier or National Criminal Information Center has reported the device lost or stolen. If it has, the transaction will be cancelled.

If a person realizes their device was stolen, they can retrieve their device from an ecoATM kiosk if it has not yet been removed, said ecoATM.

What to do if your device is stolen

If your device is stolen, report it to your carrier or to law enforcement so it can be listed in the above databases. In the event the thief tries to cash it in at an ecoATM, then the transaction will be declined.

If you think you have misplaced your device, try using an anti-theft or locating software like Find my iPhone.

Whenever you report your device stolen to your carrier, request written confirmation. You will be responsible for any charges incurred prior to the report.

More info about what to do if your device is stolen can be found here.