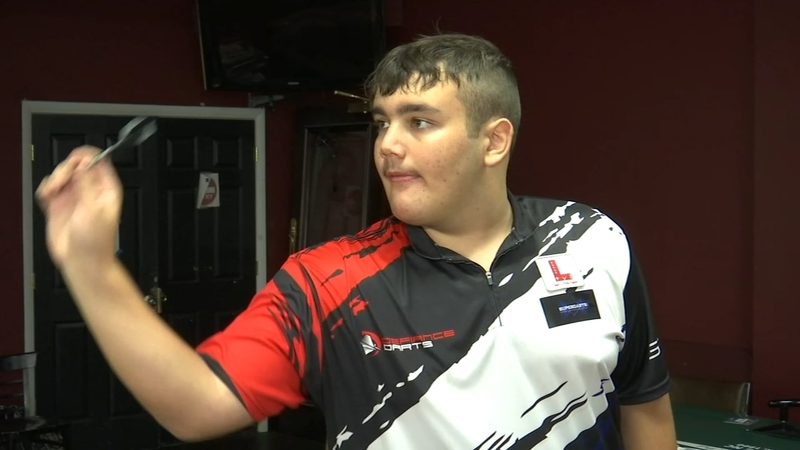 The game of darts has already taken one Clayton youngster around North America and soon he's going much farther.

"I was very excited that I won because now I get to go to the Netherlands and represent the US," he said.

This mountain of a 15 year old is climbing to new heights. PJ Stewart recently won the youth national championship in darts for a 2nd time earning a trip abroad. Story on @ABC11_WTVD tonight. @adodarts pic.twitter.com/EMgJf6t3YE

When you have sponsors on your shirt, you're already a big deal and Stewart is just that in the world of darts. He started playing a few years ago with his dad in the garage -- a hobby that developed into an obsession.

"It was very competitive in the garage. Me and my dad would always battle it out," he said. "There was two years where I couldn't beat him, but eventually I've just been able to beat him ever since."

"From a kid he was talented you could tell. It's a weird thing," Phillips said. "You can see instantly when someone has it. And he's just gotten better and better ever since he was little."

"I put a lot of time into it," said Stewart. "When I first started I was playing six, seven hours a day for a good eight months or something like that I was just playing. Eventually I started getting natural at it and it was good."

The first tournament Stewart entered in 2018 he took first and the winning hasn't stopped. Phillips has been throwing for 25 years and, as a former national champion himself, knows how tough getting to the top is.

"It's mostly mental. You have to be able to handle the pressure when everybody is staring at you and you have to go up there."

Stewart, who will be a junior at Cleveland High School hopes to make a living at darts one day. He's also targeting a different way to cut through the air.