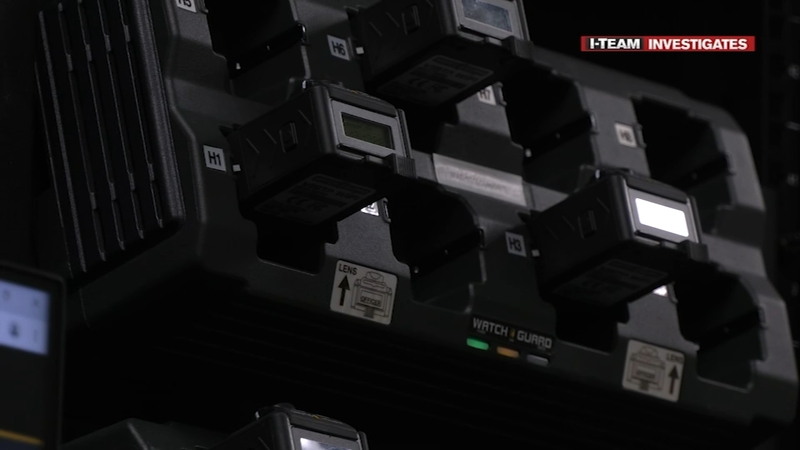 DURHAM, N.C. (WTVD) -- The nationwide push for trust and transparency from law enforcement has led to more agencies across the nation adopting body cameras, but cost remains a big obstacle.

The Durham County Sheriff's Office became the latest agency in the Triangle to start using body cameras. For the last month, close to 200 deputies have utilized the devices while in the field.

"As a department, we always want to have trust with the community," Durham County deputy Brandon Teel said. "We want the community to have a department that they can trust. So, these body cameras, I feel, is a positive step as far as building relationships and building that transparency within the community."

The cameras add to the in-car cameras the agency was already utilizing. Teel said the cameras will provide additional footage for cases and also provide training opportunities within the agency.

"I've been a huge advocate of the body camera system. It's just another tool that we as officers can use to help when it comes to investigative purposes as well as far as the performance of our daily duties," Teel said.

The cameras and the system cost around $1.1 million dollars that were allocated from the county's Capital Improvement Plan.

The county's program comes after many other agencies have implemented the devices for years.

A third of the local North Carolina agencies the ABC11 I-Team reached out to have added body cameras to their force since 2018.

Just sixteen percent of the 31 agencies that the I-Team surveyed did not have body cameras, including some larger agencies.

The Wake and Cumberland County Sheriff's Offices still do not have body cameras.

Wake County is in the process of equipping 200 deputies after receiving a $200,000 federal grant and county funds at the end of 2021.

Similarly, the Cumberland County Sheriff's Office is hoping to implement the devices soon after receiving a $700,000 grant in December.

The Fayetteville, Raleigh, and Durham police departments have had body cameras for at least the last four years.

North Carolina Highway troopers also do not have body cameras.

"It was found that a vast majority of our public encounters take place at traffic stops and on collision scenes lending patrol vehicle-mounted recording devices to be more appropriate," an NC State Highway Patrol spokesperson said.

Close to 90% of Americans support officers wearing body cameras, according to the Cato Institute. Despite, the overwhelming support obstacles remain.

North Carolina Central University Police Chief Damon Williams is also the president of the NC Association of Chiefs of Police. He explained many agencies he speaks with do support these devices but it comes down to cost.

"Administrators are faced with so many other obstacles that they have to articulate in their budgetary process, that when they articulate that one, a lot of times they get pushback from the politicians, not law enforcement executives," Williams said.

He said this is particularly an issue now as underfunding of departments starts to have ripple effects and agencies struggle to recruit and retain officers.

While multiple federal and state grants are available to implement body cameras, Williams explains the cost goes beyond just purchasing the cameras.

"So to get a high-quality system requires a recurring cost every year for cloud storage, and so on and so forth," Williams said. "You look at a cloud base kind of process, you're paying recurring cost anywhere from $30,000 up a year on those systems depending upon how many cameras you're going to want to pursue. So it really is a cost factor, I think, for a lot of agencies."

The Johnston and Vance County sheriff's offices also do not use body cameras and cited the high costs specifically associated with data storage.

A report from the Police Executive Research Forum found in 2018 the median annual cost of a body camera program was around $5,000. However, the size of the agencies increases the annual cost. The report found costs can exceed $1 million for some departments. The Durham County Sheriff's Office said they anticipate their annual costs will be between $45,000-$55,000.

However, many law enforcement officials believe the benefits outweigh the costs.

"It does keep us honest. It does. It does hold officers accountable for their actions. If an officer loses their cool in the field, the body cams going to show it. So there are some great benefits for the public, for the law enforcement community and keeping all of us honest, when it comes to our actions out in the field," Williams said.

Studies have shown mixed results on the effectiveness of the cameras in regards to officer safety, citizen complaints and agency liability.

One of the latest studies out of the Chicago Crime Lab last year found complaints against police dropped by 17% and use of force incidents fell by 10% when agencies utilized body-worn cameras.

Locally, agencies hope the devices can continue to build trust with community members.

"I believe that just having the cameras and citizens knowing that we have these body cameras implemented, they can just build that relationship. And they know that we as officers are holding ourselves accountable for the things that we do on a day-to-day basis," Teel said.