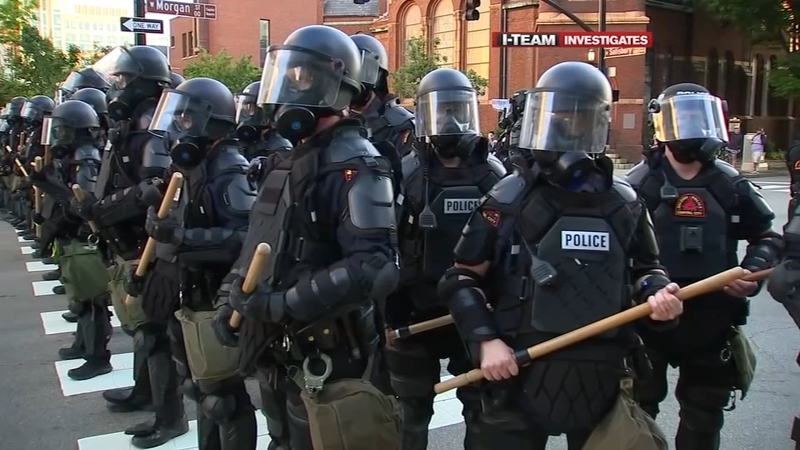 WAKE COUNTY, N.C. (WTVD) -- A riot may be the language of the unheard, but that's only because police have the means to drown out the noise.

The ABC11 I-Team revealed how police departments and sheriff's offices throughout North Carolina have been gearing up and stocking up on military-style equipment, much of which was on display during protests in the days following the death of George Floyd.

Much of the equipment comes directly from the U.S. military, which shares surplus supplies through the 1033 Program, but several agencies are also using taxpayer dollars to purchase their own equipment, including riot gear, armor, rifles, stun guns and ATVs, among other items.

However, Taylortown Police Department Chief Damon Williams, who also serves on the executive committee for the North Carolina Association of Chiefs of Police, said the existence of this equipment doesn't mean it's regularly used.

"I think the misconception is these things are in the field all the time and they're not," Williams said. "They're only utilized when they're absolutely necessary. Trust me -- a lot of thought goes into how we deploy, when we deploy, what is the right time to deploy. We don't just do these things without heavy thought about the situations we're dealing with."

Those situations, according to Williams and other law enforcement officials, extend well beyond civil unrest and include active shooter situations at schools and workplaces

"I think you have to examine being prepared versus not being prepared," Williams said. "We know that people have AR-15 rifles. People have high powered magazines. Those things exist out there, and if we are not prepared to respond if things are deployed, we could have loss of life and that's not our goal."

More than $44 million worth of supplies have been delivered to police departments and sheriff's offices in North Carolina via the 1033 program, but large agencies with large budgets are able to afford their own orders as well.

Generally, money spent by these agencies can be allocated and approved by the city council or county commission, though they don't have to sign off on itemization. As the fiscal year nears its end, it's possible community leaders will press local officials to "defund" or at least divert funds from law enforcement to other government entities.

Williams, whose Association of Chiefs of Police represents approximately 400 jurisdictions across the state, said he's open to looking at how to divert funds away from local law enforcement toward community programs and other government agencies.

Beyond the community debate, lawmakers on Capitol Hill are also engaged in how to reign in reports of police misconduct and allegations of excessive use of force.

RELATED: Chokeholds considered 'deadly use of force' in many local police departments

"I think one of the hallmarks of a lot of the problems is excessive shows of force like showing up to peaceful protests in riot gear and massive weapons," Rep. David Price, D-NC, said. The long-time congressman, who represents parts of Wake, Durham and Orange counties, supports the creation of a national registry of police misconduct and ending the 1033 program.

"Part of this is to send a message that excessive force is not appropriate and not conducive to good policing and good order," Price said.