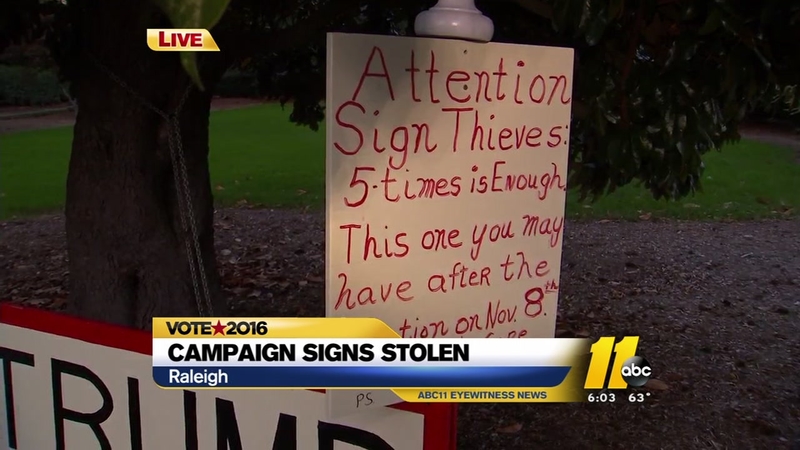 Both sides fed up with campaign sign theft, vandalism

RALEIGH (WTVD) -- A thick chain with a padlock secures a wooden homemade "Trump-Pence" campaign sign to a large magnolia tree in a front lawn in Raleigh.

A message from the homeowner, Fred Thornhill, written neatly on a smaller sign nailed to a post above it reads: "Attention sign thieves 5 times is enough. This one you may have after the election on Nov. 8th not before. Ps. I forgive you."

"I was tired of the theft for sure and I wanted to be polite about it, just to let people know where I stand," said Thornhill. "It's the right we have."

"Why so much hate? Why not leave it alone?" Both @realDonaldTrump & @HillaryClinton supporters tired of campaign signs stolen/damaged #abc11 pic.twitter.com/2E3oaKlFpc

On the other side of the city, Joe Peoples described how people have stolen at least eight of his Trump campaign signs out of his yard, prompting him to make one himself out of a wooden pallet and some paint.

"They tried to take this one," he said, pointing to the red and blue makeshift campaign sign, the name "Trump" painted on the front and back. "If you notice the legs are broken off. They tried to take it. They got it to the road but they couldn't get it in their car so they left it."

INTERACTIVE: WHERE CLINTON AND TRUMP STAND ON THE ISSUES

As Peoples explained his frustration, Donald Laregina of Louisburg pulled over on the side of the road and walked into Peoples' driveway.

"I'm a Trump supporter," he said. "I have pictures. They just tore down my signs."

Peoples, who said he had never met Laregina before, walked over and patted him on the back, "Join the crowd sir," he said.

Laregina was on his way to the Trump campaign headquarters in his pickup to pick out a replacement 4-by-8 foot Trump-Pence sign.

Vandals continued to damage the one he'd had posted on his property, punching holes through it and pulling it off the wooden support beams.

"You know, it's America," Laregina said. "You can vote for whoever you want to vote for. But I don't like the idea that people are coming on my property, trespassing. My signs aren't even in the right of way. It's just not right."

In Johnston County on Thursday, Ruth Silva opened the back of her SUV where about 20 mangled and torn Democratic campaign signs were piled up; she said she drove past her property off of Booker Dairy Road in Smithfield the night before to find them all damaged.

One of the candidates Silva's backing, Crystal Roberts, a Democrat running for the Johnston County Board of Education, told ABC11 an independent contractor for the NC Dept. Of Transportation is responsible for damaging the signs.

The DOT denies responsibility but Silva believes the act was deliberate.

"Why so much hate? Why not leave it alone? It's not bothering anyone," she said. "It's on my private property."

As both Democratic and Republican supporters agree vandalism and theft have no place in the elections process, they're discouraged by what they've seen but hopeful that voters will take their frustrations off of one another and march them down to the polls.

"I encourage everyone whether they're Republican, Democrats, they should come out and vote," Silva said.

Win or lose, many of them are just looking forward to the morning after the election.

"Just treat other people the way you want people to treat you," Peoples said. "I'm ready for it to be over."