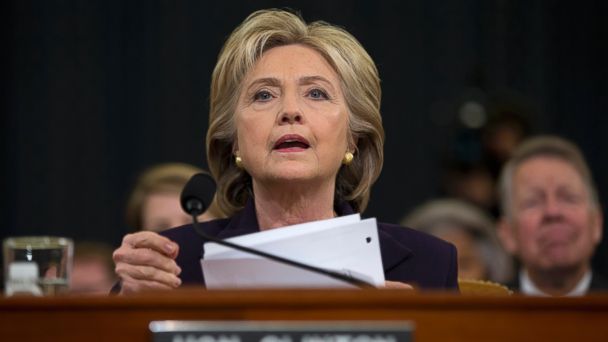 Washington observers and political junkies have been fixated on this testimony for months, waiting in anticipation to see what impact it may have on her campaign.

The pressure was on Republican Committee Chairman Rep. Trey Gowdy to produce results or information that differs from Clinton's full day of congressional testimony on the attack nearly 3 years ago.

The hearing began with heated opening statements from Gowdy and the ranking Democrat, Rep. Elijah Cummings. Gowdy said that previous investigations into the Benghazi attack were "not thorough" and blamed Democrats on the Benghazi Committee for not taking the current investigation seriously.

Cummings fired back in his opening statement. "Clearly, it is possible to conduct a serious, bipartisan investigation. What is impossible is for any reasonable person to continue denying that Republicans are squandering millions of taxpayer dollars on this abusive effort to derail Secretary Clinton's presidential campaign," Cummings said.

At #BenghaziCommittee hearing, Rep. Trey Gowdy assures @HillaryClinton the investigation is not about her: pic.twitter.com/YpWMKUf9qd

Gowdy said her testimony had been delayed not because they wanted to hurt her politically, but because of her private email account that made it so difficult to request her records from the State Department.

In Clinton's opening remarks, she reiterated that she knew Ambassador Stevens personally and was the one who asked him to serve in Libya. She said the U.S. government needs bipartisan agreement when it comes to foreign policy, despite disagreements.

"My challenge to you, members of this committee, is the same challenge I put to myself. Let's be worthy of the trust the American people have bestowed upon us. They expect us to lead, to learn the right lessons, to rise above partisanship and to reach for statesmanship," Clinton said.

Gowdy deferred to one of his colleagues and elected not to conduct the first round of questions. Rep. Peter Roskom, R-Illinois, asked the first questions. He chose to focus on why the U.S. was in Libya to begin with, but the premise of his questions was lost after repeatedly interrupting himself to remark on Clinton's use of notes.

"I can pause while you read your notes from your staff," Roskam said.

Before turning on her microphone Clinton remarked that she is capable of doing more than one thing at a time.

Later during the hearing, Rep. Mike Pompeo, R-Kansas, had a contentious exchange with Clinton on a number of topics.

Pompeo asked why no one had been fired after an attack that killed a U.S. ambassador for the first time in over 30 years. He also wanted to know why journalist Sidney Blumenthal had such good access to Clinton, while, as Pompeo alleges, those who worked for her did not share that same access.

Clinton said Blumenthal was a friend who was simply sharing information and was not working for the U.S. government. Some of that information she passed on and some she did not, Clinton said. She later said he was not her main adviser on Libya, as many of her critics have alleged.

Rep. Susan Brooks, R-Indiana, used email printouts as a prop, suggesting there were not enough emails about certain events leading up to the attack, eliciting a response from Clinton that most of the communication she had was not done over email.

Rep. Martha Roby, R-Alabama, tried to pin Clinton down over a Feb. 9, 2012, email from State Department staffers that suggested Clinton was unaware if the U.S. had a presence in Benghazi at all. Clinton said the people who sent that email were not members of her staff and that they got it wrong.

"Of course I knew we had a presence in Benghazi," Clinton said.

Rep. Adam Smith, D-Washington, used his time to attack the committee forcefully. He said they committee had an obsession over her email, evidenced by the questions so far. He attacked Gowdy's opening statement, saying it offered no new facts, and said he didn't think there was a need to form the committee in the first place. He criticized Roskom for using his time to ask a series of questions about why the U.S. was in Libya.

"That's not about Benghazi," Smith said, then saying to Clinton, "They are making this about you."

In one emotional exchange, Rep. Adam Schiff, D-California, asked Clinton what it was like "to be the subject of an allegation that you deliberately interfered with security that cost the life of a friend."

"Congressman, it's a very personally painful accusation. It has been rejected and disproven by nonpartisan dispassionate investigators," Clinton said. "Nevertheless, having it continued to be bandied around is deeply distressing to me. I lost more sleep than all of you put together. I have been racking my brain about what more could have been done."

The lead-up to today's testimony has seen vicious political sniping from Democrats on the committee, who have seized on remarks in recent days from two Republican congressman and one former committee staffer, each of whom suggested publicly that the committee has disproportionately focused its attention on attacking Clinton.

Gowdy has vehemently denied those claims, calling on his colleagues to "shut up" about what they don't know. Last Sunday, Gowdy said in an interview with CBS he plans to question Clinton about her role in denying requests to increase security at the U.S. consulate in Benghazi prior to the attack. He said thousands of previously unseen emails to and from Stevens obtained by his committee will help inform those questions.

The House Select Committee on Benghazi was created in May of 2014 with the purpose of conducting a full and complete investigation of the 2012 attack. Prior to Clinton's testimony today, the committee had held only three public hearings. Most of the testimony it has received so far has come in private sessions.

The aftermath of the Sept. 11, 2012, attack on a U.S. consulate in Benghazi and the nearby CIA annex instantly became a source of political tension. President Obama faced questions about the military response, allegations he misled the public about the nature the attack, and lax diplomatic security in a war zone, all as he awaited a vote on his reelection the following month.

Numerous investigations and reports were written about what happened both on that night and in the lead up to the attack, and what needed to be done to ensure it wouldn't happen again. Two of the higher-profile reports were conducted by the Accountability Review Board (ARB), convened by Clinton herself who was Secretary of State at the time, and another later on by the Republican-led House Intelligence Committee.

In December of 2012, the ARB concluded that there was no protest before the attack (which the Obama administration has previously alleged), that the terrorist bore sole responsibility for the loss of life, and that "systematic failures of leadership and management deficiencies" at the State Department led to an "inadequate" security posture.

Clinton was never directly implicated in the report. Clinton has admitted that the State Department could have done more to address security needs in Benghazi prior to the attack, but said those decisions were left to other people and she has denied any wrongdoing.

The House Permanent Select Committee on Intelligence focused on the CIA's response to the attack following accusations personnel on the ground were instructed to delay their response to the consulate, which was being overrun by militants less than one mile way. The report concluded that no such order had been given, despite contradictory witness accounts given by some contracted security officers who were there that night. It also concluded that a mixed group, including Al Qaeda affiliates, were responsible for the attacks. It found that there had been intelligence to support the administrations claims that the attack was borne out of a protest, but said there was early intelligence to counter that false assessment as well. The report declared itself as the "definitive House statement" on the Intelligence Community's involvement in the Benghazi attack.
Related topics:
politicshillary rodham clintonbenghaziu.s. & worldhillary clintonabc newsnational
Copyright © 2022 ABC News Internet Ventures.
RELATED
Protester Waits Outside Benghazi Hearing in Orange Jumpsuit
TOP STORIES
$1.3M Raleigh home listed on Zillow for $17,000 in latest scam
19 kids, 2 teachers killed in TX school shooting; gunman's mom speaks
4th grader 'did what she had to to survive' Uvalde shooting, aunt says
1 person found dead with gunshot wound in Durham crash
Several companies pull products linked to Jif peanut butter recall
Severe storms possible Friday, nice weekend ahead
Memorial Day triggers 'heavy' emotions for military families, veteran.
Show More
Chapel Hill, Hillside HS students stage walkout for Uvalde victims
Wake, Durham districts discuss school resource officer role
Chapel Hill man charged with murder after body found in burning car
'Goodfellas' and 'Field of Dreams' actor Ray Liotta dies at 67
Officials: Buffalo, Uvalde shooters allegedly abused animals
More TOP STORIES News