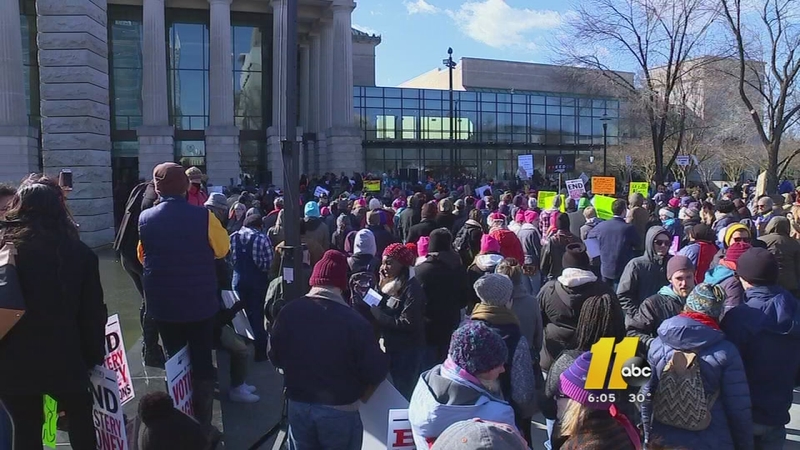 RALEIGH (WTVD) -- The tenth HKonJ Moral March through downtown Raleigh attracted huge crowds on a bone-chilling Saturday. One of the primary reasons for the large turnout was to protest what they say is North Carolina's vote suppression. Legislators passed a law which requires photo identification to vote, which has been a controversial topic.

"We believe that North Carolina's voter suppression law is one of the most draconian in the country," said Leo Jones, a protester. "And that we as a faith, Unitarian Universalists, need to stand up to both witness and to act."

Many people carried signs, sang, and chanted slogans. Fraternity and sorority members were among the most visible, vocal demonstrators.

"With the Voting Rights Act of 1965, we thought that this was solved," said Antoine Marshall of the Alpha Phi Alpha Fraternity. "And for these same issues to come back up, it's just another blow to democracy and another blow to access to the ballot box."

Some of the people gathered in Raleigh for the 10th #HKonJ march and rally. #abc11 is there, live this morning. pic.twitter.com/pDuslAwuQe

Speakers at the rally in front of the N.C. Capital also talked about immigrant justice, women's rights, Islamophobia, and more hot-button issues related to the vote.

But it appears that not everyone who came out for the march actually supports the concept.

Rev. William Barber of the NC NAACP mentioned the dissenters from the stage. "Now we've got a group of people trying to stop the march on Hargett Street, and it's ridiculous! They claim to be with a certain group, I don't want to say the name."

ABC11 checked moments later, but couldn't find the people Barber referenced on Hargett Street. Elsewhere in Raleigh, there are critics of the annual demonstration.

"It's an organizational tool for the left, trying to get the vote out for the Democrats," said Dallas Woodhouse of the North Carolina Republican Party. "It hasn't worked too well in the past few years as the Republicans have had strong elections in the last three cycles."

Organizers of the HKonJ rally and march urge all eligible voters to show up on election day.

"We want to get the attention of the people on Jones Street as well as the people on Main Street," said North Carolina Central University law professor Irving Joyner. "So we're pushing and moving. The elections are coming up, we want everybody to vote and that's our prime message that we're trying to get out to everyone."