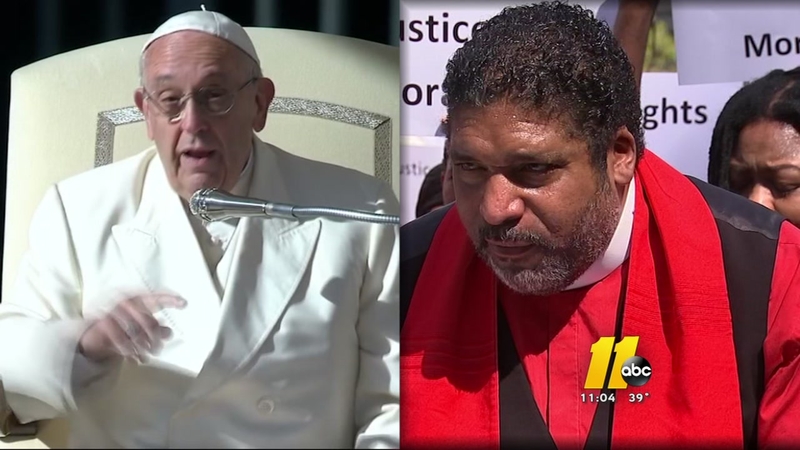 Since stepping down from his post as president of the North Carolina NAACP this fall, the Rev. William Barber has quickly transitioned into the life of a national activist; flying from city to city with the social justice message he sharpened here in North Carolina.

But on Tuesday, Barber takes those themes to the international arena for a meeting with Pope Francis.

"Get out and vote like you have never voted before," Barber said to the crowd of 100 gathered inside the Birmingham church. "There is nothing Christian about the policies Moore has supported."

Barber returned home to Goldsboro this week, but only for a moment. The Vatican awaits.

He spoke to ABC11 by phone about his newfound status as the go-to voice of the nation's progressive movement.

He's president of the newly-formed, Repairers of the Breach, an organization based largely on his Moral Monday / Forward Together movement that grabbed headlines beginning in 2013 for near-weekly protests and subsequent arrests over GOP-backed policies at the North Carolina Legislature.

"I believe in nationalizing state movements. That's what we did in North Carolina. As I'm traveling around, I'm actually trying to work to empower people in the local area."

"It was Barber's primetime speech at the Democratic National Convention that truly vaulted him into the national spotlight. Now, Barber's message of public policy on systemic poverty and racism influenced by his reading of Bible-based morality is on the international radar.

He flies to the Vatican o Tuesday as one of dozens of global leaders invited by Pope Francis to discuss government's role in reducing world poverty.

"The pope understands that poverty is not merely a personal failure or personal morality; it's a failure of society," Barber said.

And hours away from his first chance to meet the pontiff, this brash southern preacher not known to be timid, sounded a bit nervous.

"It's just a bit nerve-racking to some degree. But it's very humbling," he said.