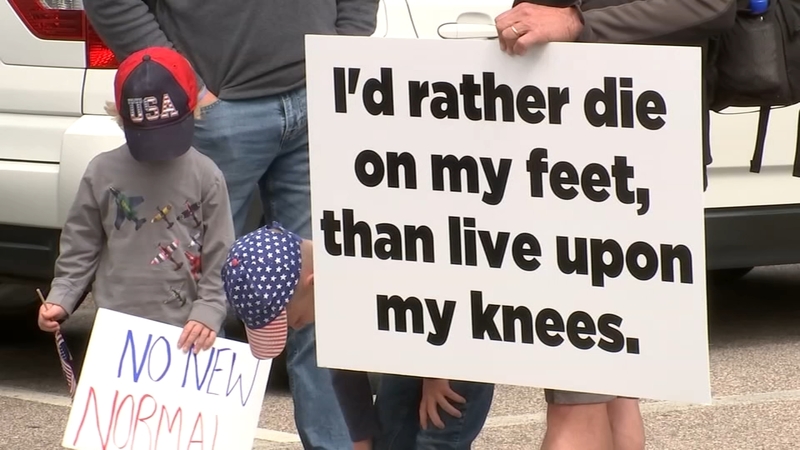 RALEIGH, N.C. (WTVD) -- Despite the governor's order to move ahead with Phase 1 of the plan to reopen North Carolina, which began Friday, hundreds of ReOpen NC protesters still rallied Tuesday.

Outside the North Carolina General Assembly, protesters began gathering around 11 a.m. They later marched to the governor's mansion.

A counterprotester hired an airplane to fly a banner over the protest that read, "Fewer graves if we reopen in waves."

Folks are gathered in downtown #Raleigh for a #ReOpenNC demonstration. This airplane banner is counter protesting saying “Fewer graves if we reopen in waves.” I talked to the man who paid for this banner himself. Hear from him on #abc11. Banner photo from photographer Paul Furr. pic.twitter.com/x6dwKTI0AV

Todd Stiefel paid $3,500 for the airplane banner. He said he is immunocompromised and couldn't be there in person.

"I think there's millions of people out there that feel very strongly that we need to reopen and get the economy going but do so carefully and according to the science," Stiefel said.

Reilly, an accountant, said he was laid off during the COVID-19 pandemic.

"I'm still unemployed," Reilly said. "I work for a manufacturing company that doesn't have enough orders, not hiring people back yet."

Police monitored the protest, and a portion of Blount Street was closed during the protest.

The ReOpen NC movement started as a reaction to the government closing businesses at the advice of healthcare experts who said it would help slow the spread of COVID-19.

Healthcare experts, in North Carolina and across the country, say the stay-at-home efforts have succeeded in saving lives and preventing people from getting sick with the virus.

States are now starting to ease those stay-at-home restrictions. North Carolina is in phase 1 of its reopening plan.

Some retailers have been allowed to reopen, but they are having to operate at reduced capacity and follow strict safety guidelines.

More retailers -- including bars and restaurants -- will be able to reopen in phase 2 of North Carolina's plan, which could begin as early as May 22.

ReOpen NC activists have protested at least once every week since April 21.

Protesters in the ReOpen movement initially argued that the stay-at-home regulations were too stifling on businesses and families who need the income from those businesses.

The group is now saying the reopening process is moving too slowly.

Hamm added that there is concern about limiting citizens' rights.

"We should have the choice," Hamm said. "If you want to stay home, stay home. If you want to get out, get out. You have your choice to wear your mask. I have a choice not to wear mine."

Stiefel said that despite divisions and differences of opinions, he hopes everyone will unite to help beat the virus.

"The ReOpen protesters tend to cloak themselves in this aura of patriotism, but true patriots sacrifice for the freedoms of others," Stiefel said. "They don't sacrifice others for the benefit of themselves.

"It's worth every penny if we can get the message out there that we need to reopen the economy safely and carefully," Stiefel added.

Reilly is critical of the government's handling of the outbreak.

"Vulnerable people need to stay home. Really if I was vulnerable, my parents were vulnerable, I'd say stay home and I'd do everything I can to protect them, and those people are the people that need to be protected, but it's a very small population compared to the rest of us," Reilly said. "I think they made a big mistake in the beginning. I think they should have spent the time and the money on protecting the vulnerable and let the other 90 percent go to work."