Report: Billions in federal money at risk in HB2 fight 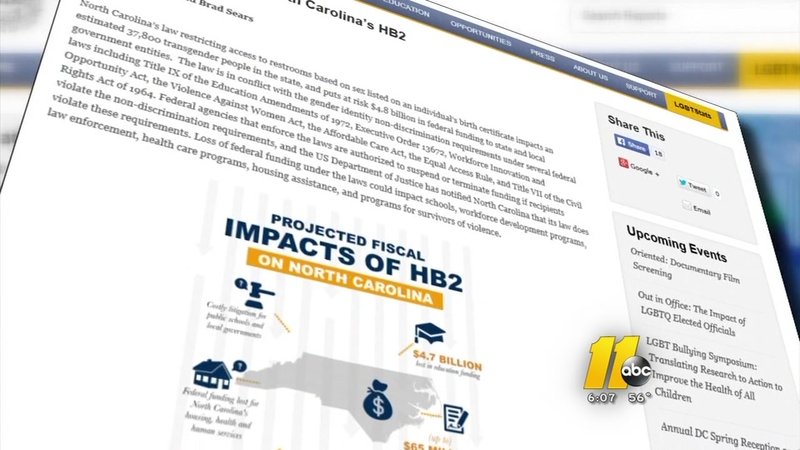 North Carolina could stand to lose $4.8 billion in federal funding if House Bill 2 stands on the books, according to new research.

The UCLA Law School's Williams Institute, which primarily focuses on sexual orientation and gender identity law, did the research.

"It's lot of money. North Carolina is one of the bigger states in the country so of course there's more funding going there," said Christy Mallory from the Williams Institute.

The Institute says education will take the biggest blow and $4.7 billion could be ripped away from classrooms.

"It means teacher salaries, staff salaries, all these kinds of things being supported by federal funding," Mallory said.

The Institute says the potential impact of the law includes:

The Wake County Public School System says it has not received any direct communication from the federal government related to HB2 or its potential effect on funding.

The Board of Education proposed 2016-17 budget was approved Tuesday. The WCPSS anticipates 8 percent of its operating budget will come from federal sources, amounting to nearly $115 million.

"We do not have any indication how much, if any of that funding could be affected," said WCPSS spokesperson Heather Lawing. "As a result, our attorneys are reviewing the most recent developments."

A Monday deadline is looming in the fierce battle of HB2. The federal government is demanding a repeal.

The controversial law bans transgender people from using the bathroom that they associate with in public facilities. Instead, all people must use the public facilities that correspond with the gender on their birth certificates.

Top Republican leaders, who helped push the law through in a one-day special session, are vowing to defy the deadline.

Gov. Pat McCrory said he will respond to the DOJ on Monday.

The State Attorney General's Office is not advising McCrory and top Republican lawmakers in the case.

Meanwhile, a lawsuit against the federal Justice and Education departments has been filed over what supporters say is a flawed interpretations of the Civil Rights Act.

"This is radical overreach by the Obama Administration trying to force in really objectionable and extreme definition of the Civil Rights Act of 1964," said North Carolina Values Coalition Executive Director Tami Fitzgerald. "They're trying to force all the schools in America and all the states in America to create rights for people based on how they feel about what their sex is rather than what reality is."