TIME Magazine asks 'What kind of country are we?' in cover featuring Trump, crying immigrant girl 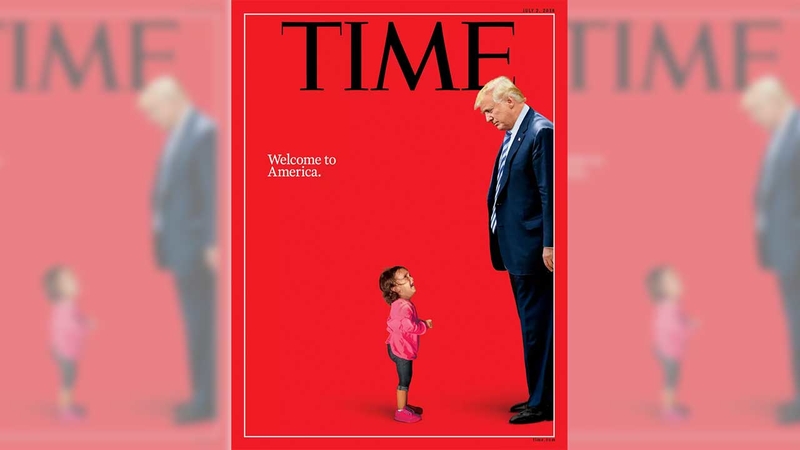 The image of a crying toddler that has become a symbol of immigrant families was used in TIME Magazine's new cover, which is edited to show President Donald Trump looming over the girl.

TIME’s new cover: A reckoning after Trump's border separation policy: What kind of country are we? https://t.co/U4Uf8bffoR pic.twitter.com/sBCMdHuPGc

In the cover story, TIME examines the president's rhetoric and the ideals associated with it.

"For the first 240 years of U.S. history, at least, our most revered chief executives reliably articulated a set of high-minded, humanist values that bound together a diverse nation by naming what we aspired to: democracy, humanity, equality," TIME's Karl Vick wrote in the cover story that goes along with the photo.

"With each passing month he (Trump) is testing anew just how far from our founding humanism his "America first" policies can take us. And over the past two months on our southern border, we have seen the result," he wrote.

The photo of the little girl was taken by John Moore, a Pulitzer Prize-winning photographer for Getty Images. He took it during a ride-along with a Customs and Border Patrol agent on June 12. The girl was among a group of women and children gathered on a dirt road that the agents stopped near McAllen, Texas.

An agent asked the mother to put the child down, and the little girl immediately started crying. That's when Moore snapped the now-famous photo.

TIME's editors said they chose the image because it was so powerful.

"This one was tough for me. As soon as it was over, they were put into a van. I had to stop and take deep breaths," Moore told TIME. "All I wanted to do was pick her up. But I couldn't."

Moore said he was able to speak to the mother briefly and learned that the little girl was a 2-year-old from Honduras.

Moore, who as a photojournalist has been covering the U.S.-Mexico border for a decade, said he did not see the pair separated but that policy at the time would indicate their separation.

"All that happens behind closed doors... We'll never see that," he told ABC News.

On Wednesday President Trump signed an executive order that he said would end the separation of children from their parents when families cross illegally.

"Trump may have backed down on the specific practice of family separation, but the larger question remains," Vick wrote in the cover story. "In the balance between the integrity of the U.S. border with Mexico and a parent's love for a child, where will we come down?"
Report a correction or typo
Related topics:
politicsimmigration reformdonald trumpu.s. & worldpresident donald trumpimmigration
Copyright © 2021 WTVD-TV. All Rights Reserved.
TOP STORIES
LATEST: Gov. Cooper to give COVID-19 update at 3 p.m.
J&J says 2nd dose of vaccine after 2 months results in more protection
How to find out if your information was part of a data breach
Autopsy set to be performed on Petito; Laundrie remains missing
Powerball drawing yields no winner; lottery jackpot at $490M
NC native who prosecuted Derek Chauvin reflects on case at Duke
Show More
NCSU's Keatts helps tailgating fan find lost wedding ring
'I just want justice': Mother of NCCU shooting victim speaks out
Wake doctor 'optimistic' after Pfizer says vaccine safe for ages 5-11
911 caller claims he saw Brian Laundrie 'slapping' Gabby Petito
Fayetteville homicides up 30% compared to last year, police say
More TOP STORIES News