Trial over HB2 and UNC system being pushed back to May

WTVD
By The Associated Press
RALEIGH (WTVD) -- The trial over a North Carolina law restricting restroom access for transgender people is being pushed back by several months, attorneys challenging the law said Friday.

U.S. Magistrate Judge Joi Elizabeth Peake granted a request from the state's Republican leaders to delay the North Carolina trial while the U.S. Supreme Court considers whether to hear a Virginia case on transgender restroom access, according to a brief entry in the federal court docket.

James Esseks, an ACLU lawyer on the team representing three transgender residents, said the judge's order means the case will be pushed back from its November trial date until May 2017. Justice Department spokesman David Jacobs also confirmed in an email that the trial was being delayed until May.

The so-called HB2 law requires transgender people to use restrooms in schools and many other public buildings that correspond with the sex on their birth certificate, not their gender identity. Passed in March, it also limits other antidiscrimination protections for LGBT people.

The state's Republican governor and legislative leaders argue the law is needed to protect privacy and safety by keeping men out of women's restrooms. Transgender residents challenging the law say that restroom safety is protected by existing laws, while the North Carolina measure is harmful and discriminatory.

The Republican leaders had asked the court to halt the proceedings while the Supreme Court decides if it will take the Virginia case, which centers on a transgender high school student who is asking officials to allow him to use a male restroom.

Meanwhile, the transgender plaintiffs in North Carolina received a favorable ruling when a judge ruled last week that they must be allowed to use restrooms conforming to their gender identity at University of North Carolina campuses. They have asked an appeals court to expand the scope of the ruling to all transgender people in the state, not just those involved in the lawsuit.

However, Schroeder said the plaintiffs haven't shown they'll likely succeed with their claim that HB2 also violates constitutional equal protection rights, and he reserved judgment on another constitutional claim related to due process.

The transgender residents are asking the 4th Circuit to rule in their favor on the equal protection claim, which would expand their preliminary injunction to all transgender North Carolina residents, their lawyers have said.

Lawyers for Republican Gov. Pat McCrory and state legislative leaders wrote in a filing earlier this week that the ACLU had dropped its opposition to delaying the trial, and that all parties wanted to discuss the schedule at a status conference before Peake on Friday.

Esseks said the ACLU is agreeing to the delay because it wants to give the 4th Circuit Court of Appeals time to consider the plaintiffs' request.

Schroeder is presiding over ACLU and Justice Department cases challenging the law, with assistance from Peake. Another case filed by McCrory in a separate federal court is moving more slowly. 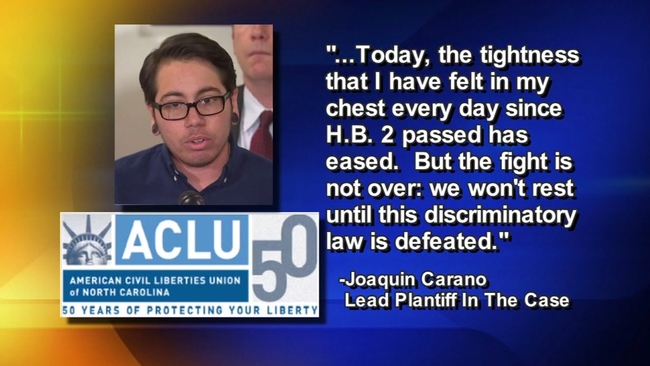