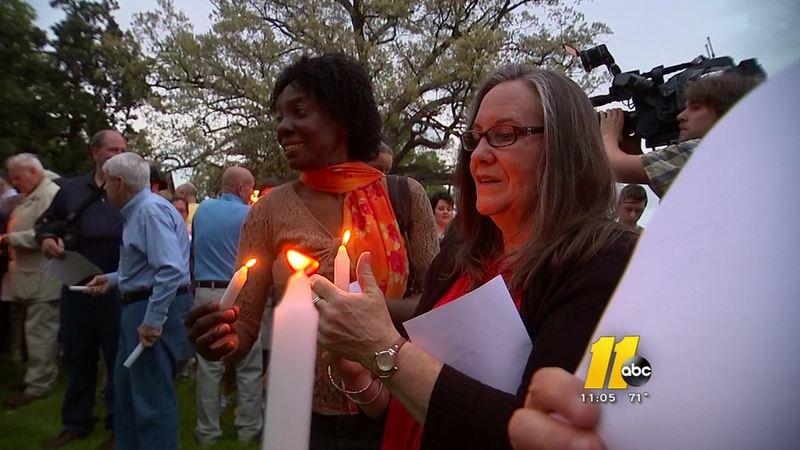 RALEIGH (WTVD) -- Supporters of House Bill 2 hosted a prayer vigil all across the state Thursday night, including outside the Governor's Mansion.

Regina Cassidy and her daughter Kaitlin are two of the more than 150 people who took part in that prayer vigil on Blount Street. They were the few who would talk to the media, after being told by one of the crowd leaders that it wasn't a good idea to talk to the media. But the two said they wanted to talk and to be at the vigil to show the faces of those who support HB2.

"We have no problems with transgender people. We know that they're good people. We don't mind sharing a bathroom, but the ordinance that Charlotte was going to put in place was too broad," Regina Cassidy said. "Our concern is our safety in vulnerable places, like the restroom."

Gov. Pat McCrory signed HB2 into law last Wednesday after it was passed in the North Carolina General Assembly.

Groups have broken off into prayer groups in support of #HB2 #ABC11 pic.twitter.com/CjypPMeHEl

The law was designed to block a Charlotte non-discrimination ordinance, part of which allowed transgender people to use bathrooms and locker rooms of the gender they identify with. House Bill 2, among other things, bans local governments from passing anti-discrimination rules that exceed state standards.

"It was going to let any man come into the restroom just because he identified that day as a female," Cassidy said.

"All of the misconduct that the other side fears here is stuff that is illegal and was illegal before House Bill 2 was passed," said Chris Brook, the Legal Director for North Carolina's ACLU. "Any sort of assault is illegal, any sort of sexual assault is obviously taken very seriously by the law. We need to enforce the laws we have on the books regarding this, as opposed to coming up with other ones that have no relationship to the stated fear."

Regina Cassidy and her daughter said they don't want to take any chances. They said while they support the governor's stance on this, they also support finding a way to come together.

"I think that the Charlotte ordinance was the wrong way to go," Kaitlin Cassidy said, "so if we could find something that would work better, keep everybody safe without risking anybody else..."

"These corporations from out of state want to tell the people of North Carolina what the public policy of our state ought to be and at some point it's going to start hurting them," said Fitzgerald. "Pray and thank the Lord for the leadership we have in the state of North Carolina."