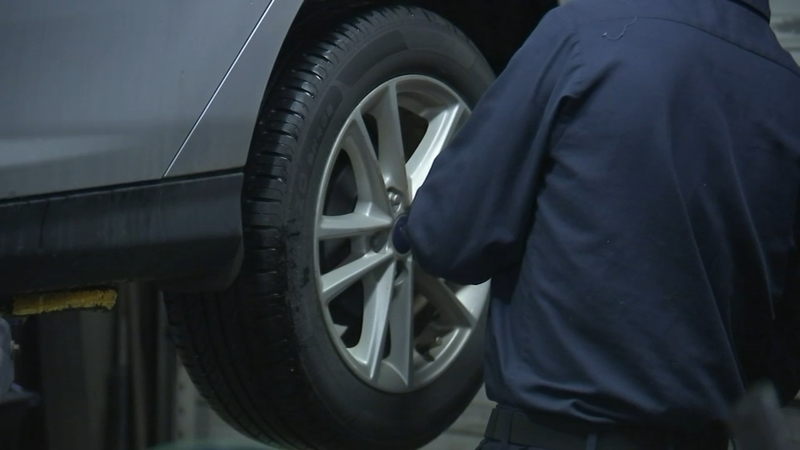 Check your tires before -- and after -- the wintry weather

DURHAM, N.C. (WTVD) -- While January is typically a slow month for body shops, Ingold Tire in Durham has been busy with drivers during the past couple of days.

"People realizing that their tires don't have good tread, and they're coming in to replace their tires to get better traction. We've had lots of folks coming in for air pressure checks. The cold weather causes tires to lose air through their sidewall," said owner Rod Ingold.

Ingold said the drivers are a combination of people preparing for Friday and Saturday's storm, as well as those addressing issues from recent severe weather.

"We've had lots of tires damaged and wheels damaged as a result of the ice, people running off the road," said Ingold.

Others have spent the past couple of days stocking up on groceries, part of Will Smith's plans.

"Making sure that my car is gassed up and prepared, (that) the tires are good on my car. (I went to) to the grocery store to get some eggs and bread, doing what I can to take care of my family," said Smith.

He said he believes he'll be better prepared for this upcoming storm following Sunday's snow and icy conditions, taking action earlier in the week. Smith said he's even adjusting how he's parking his vehicle once back home.

"Keeping it in the back of the driveway so I can move it out down the slope so it will be easier to get out," said Smith.

Ingold encourages drivers to check their vehicles once the severe weather passes.

"They need to pay attention to their tire pressure. It's important for it to be regulated where it should be," Ingold said. "They should take a visual inspection of the sidewall of the tire to see if they see any snags or bumps on the side of the tire that would indicate that they've had an impact with a pothole or a curb. Or just swing by a garage or tire store, go inside and get the folks to come out, take a look and see if they see any problems."

Though there was an uptick in customers at Ingold, that wasn't the case at a number of other tire shops that ABC11 contacted. One staffer said they did see a lot of people come in Tuesday, but it's been otherwise quiet the past couple of days.