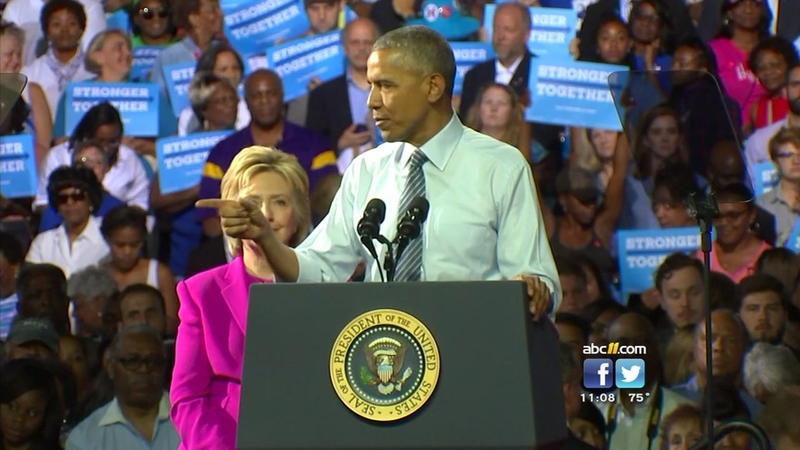 Obama and Clinton made their first joint appearance of the 2016 campaign in Charlotte. North Carolina is a state Democrats are eager to pull back into their win column.

Obama told the crowd he loves to have an excuse to come to North Carolina where the people are nice, the food is wonderful, and we have great basketball.

The president said he grew to respect Clinton immensely when they were political adversaries early on. He said she had immense passion and was hard to face during a debate.

But he said he was grateful for the way she pitched in to help him when he won the nomination because "she knew that there was something bigger at stake and that was the direction of our country."

"We may have gone toe to toe, but we were shoulder to shoulder for the ideals that we share," continued.

Obama also took a shot at Donald Trump, saying America needs a steady hand at the wheel right now.
"Anybody can Tweet, but nobody actually knows what it takes to do the job until you've actually sat behind the desk," said the president.

Clinton spoke before the president and laid out some of the specifics of what she'd like to do if she's elected. Clinton said she wants to make college debt free for all, make community college free, and help people with existing student debt.

She also spent time attacking Trump, calling on him to release his tax returns and saying he's not fit to hold the office.

"Can you imagine him sitting in the Oval Office the next time there's a crisis?" she asked.