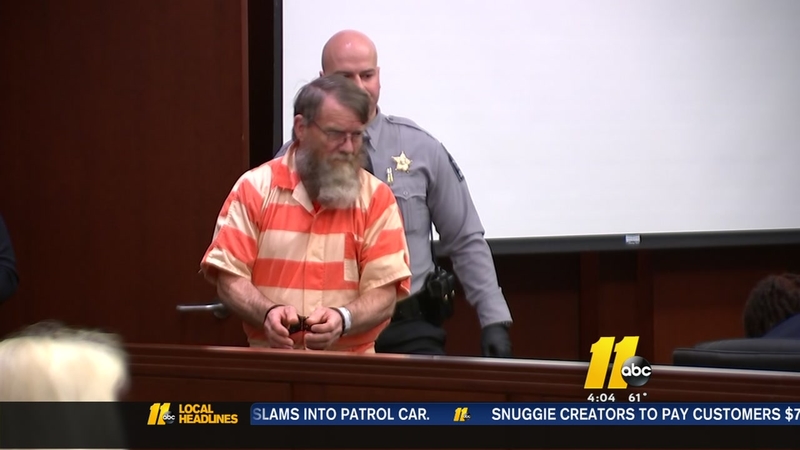 RALEIGH, NC (WTVD) -- A volunteer at a Raleigh church and Christian school has been charged with sexual battery against a female student.

Donald Chambers who lists his address as Clarksville, Tennessee, is charged with sexual battery and assault on a female.

According to his arrest warrant, the victim is a 12-year-old and Raleigh police confirm she is a student at Raleigh Christian Academy.

Listen to the 911 call from the school


Chambers was arrested at the campus of Beacon Baptist and RCA on Trawick Road in East Raleigh on Wednesday.

In that document, police write that the 64-year old engaged in sexual abuse and sexual contact because he "rubbed and held right hand on victim's breast."

Church volunteer is charged with molesting a 12-year-old student at Raleigh Christian Academy. He faced a judge for the first time this afternoon. #ABC11 pic.twitter.com/uFruVwsSCP

According to its website, the school teaches students from preschool through twelfth grade.

The pastor at Beacon Baptist Church sent a statement to ABC11 on Thursday that said in part, "As a ministry, we are always saddened when any of our volunteers are accused of breaking the law. When an allegation involves inappropriate conduct toward a child, our organization immediately removes that individual from any contact with children, and we fully cooperate with parents, state officials, and law enforcement."

In court Thursday afternoon, Chambers told the judge he could not afford to post his $10,000 bond.

If he does somehow manage to post bond, he will be subject to special conditions for people charged with sex crimes against children.

They include staying away from the child's school and home as well as not communicating or attempting to communicate with the victim in any way.

According to the pastor and the statement from the church a background check and screening were conducted before Chambers was allowed to volunteer.

"We believe that if children are safe anywhere, they should be safe at church. Beacon Baptist Church does not cover-up abuse, and we have zero tolerance for child abuse in our ministry," the church's statement said.
Report a correction or typo
Related topics:
wake countyraleighmolestationstudent safetychild sex assaultraleigh news
Copyright © 2022 WTVD-TV. All Rights Reserved.
TOP STORIES
Winter storm moves out, refreeze possible overnight
NCSHP reports 200 crashes statewide, urges drivers to stay home
Dozens of RDU flights canceled through Monday evening
Monday events canceled, postponed due to winter weather
Why do we get freezing rain instead of snow or sleet?
FBI identifies hostage-taker at Texas synagogue
How to drive on snow, ice and get out of a skid
Show More
Expect more worrisome COVID variants after omicron, scientists say
After Biden's first year, the virus and disunity rage on
Novak Djokovic leaves Australia after court rejects visa challenge
Ukraine claims Russia behind cyberattack in 'hybrid war'
Hostages in N. Texas synagogue 'out alive and safe,' Gov. Abbott says
More TOP STORIES News