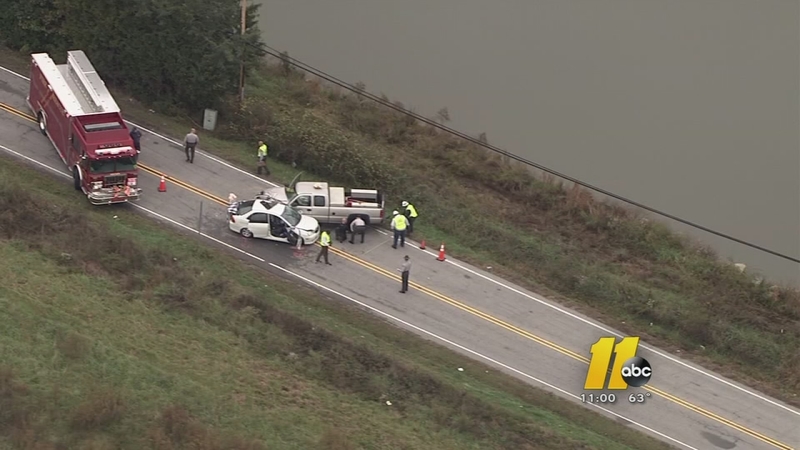 It happened just before 7:45 a.m. on Forestville Road near Old Milburnie Road in Raleigh.

The Highway Patrol told ABC11 that a City of Raleigh Public Works vehicle collided head-on with a white Suzuki sedan at a curve in the road.

The teen driver, Edward Tyler Eason, was killed in the accident. He was a junior at Knighdale High School.

Students grieved openly on social media over the loss of their classmate.

We playing hard this Friday for you bro. #RIPTylerEason

"Everyone was sad, and it was kind of a quiet, mopey day," said senior Nysia Covington.

Word of the accident spread quickly to school faculty. Knightdale High graduate Teressa Whitley was on campus at the time helping seniors fill out college applications.

"It gave me a feeling of sadness knowing that one of our fellow students passed away," she said.

The person in the Raleigh vehicle, Michael Worner, was taken to WakeMed with non-life threatening injuries. He was treated and released, according to a hospital spokesperson.

Neither vehicle had any passengers.

Prayers go out to the Eason family today.Tmrw there will be a school wide prayer circle to commemorate his life @7:45.There will be no FCA.

North Carolina State Highway Patrol Public Information Officer Jeff Gordon told ABC11 that Eason was traveling 10 miles over the speed limit when his Suzuki crossed the center line into the path of the truck. He said there will be no charges filed.

Residents nearby say speeding on Forestville Road has become a problem over the years. Steve Pair has lived in the area for decades and has witnessed too many accidents to count.

Since January, NC Highway Patrol has investigated 47 accidents on Forestville Road, 14 of which resulted in injuries.

"I've talked to highway patrolmen, and they're very nice about it, but they say it's too dangerous to stop somebody on this road," said Pair.

"Any time you have a fatality it's tragic," Gordon said. "But anytime you have a student, particularly a teenager, and here we have a 16-year-old who sadly, has died, that makes things a little more difficult for everybody involved."

They're planning to gather for a prayer vigil Thursday morning at the school's baseball field.

A GoFundMe page has been set up to help with funeral expenses. CLICK HERE FOR MORE