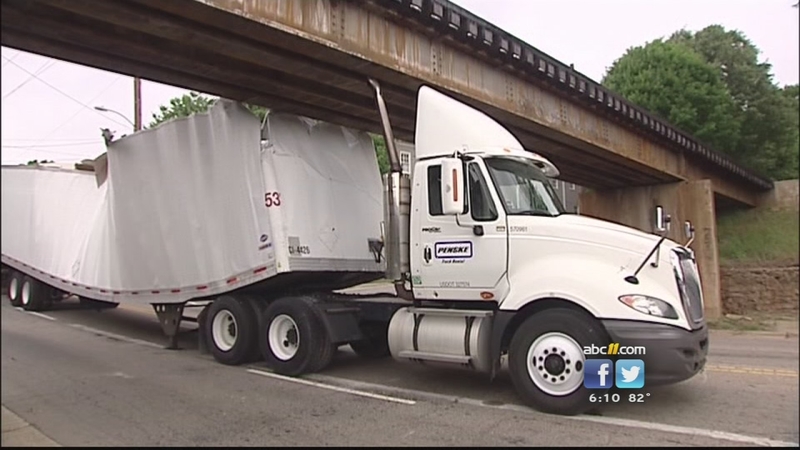 RALEIGH (WTVD) -- 12'4". It's clearly marked. In fact, there are four signs on the downhill side of the Peace Street overpass in Raleigh that tell drivers (truckers, really) how much clearance room the bridge affords. Apparently, four aren't enough.

Despite the signs and two sets of flashing yellow lights on either side of the bridge, trucks keep getting stuck under it. Just this week, we saw a large semi get stopped cold after the roof of its trailer was sheared of by the train trestle. The same exact thing happened in May and again at the end of 2013.

City engineers measured the bridge again this week and ran simulations to make sure it was marked correctly and tell ABC11 that the signs are right. The bridge is marked as it should be - at least, on paper. Out on the road, it's a different matter.

"When they built the bridge, it was the right height for trucks at that time," said Wink Montague, owner of the nearest store to the bridge, Lighting Inc. "But then they just kept increasing the height of trucks."

Montegue has had a front row seat to the accidents since the 1960s when he started working there. "Any kind of truck loaded with anything you can think of, it's hit the bridge. We had one with toilet paper and when it hit the bridge it just spewed toilet paper everywhere. We had people stopping their cars and picking up four or five rolls and getting back in their cars and driving off."

Toilet paper is one thing but Montegue says he's seen it a lot more dangerous than that. "Concrete pipes," he said, "with chains across and when they hit the bridge, they cut the chains and the pipe just rolls off the side."

"One of those Ready Mix trucks hit it one day," he went on, "and it completely took the concrete hopper off the back of the truck."

"I've seen TV sets and stereos strowed up and down the road," said Skip Flythe. He owns the bicycle shop across the street from Montegue's lighting store. "I've seen live flowers and displays being torn all to pieces. I was standing there one time talking to a customer and a truck was probably going 30-35 miles an hour and I told her, 'Brace yourself.' And when the truck hit, the whole building shook, things were falling off the wall."

Flythe and Montegue have all sorts of suggestions for how the city could fix the problem, from digging the road out to raising the train tracks to adding more signs, but city officials say there's not much, technically, wrong at the intersection.

"The signs are correct," a city engineer wrote ABC11 in an email. "We looked at the different wheel bases of trucks. Most turning template and design elements use a WB-40 type truck. We checked the clearance as posted for 12'-4" for a WB-67 and WB-62 and both fit under the bridge despite the vertical curvature of the road with no conflict."

But many who work around the bridge say if nothing changes, the accidents will keep happening. Flythe thinks a lot of it has to do with the truck drivers. "It's typically a truck driver not from this area, he's not familiar, he's lost. And he comes barreling down and he doesn't see those flashing signs. Or, thinks he can get through it."

But like others here, Flythe believes one thing above all else is true when it comes to fixing the problem for good. "If it were an easy job," he said, "they would have done it by now."