Suspect in Raleigh violent crime spree extradited back to NC 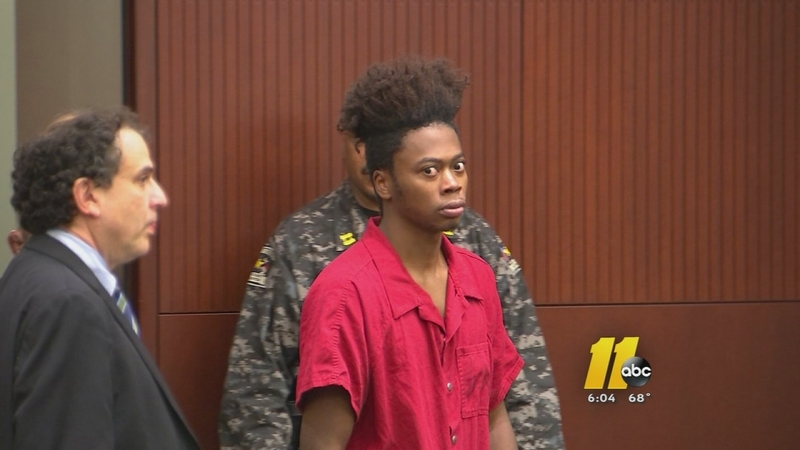 RALEIGH (WTVD) -- The man accused of a violent crime spree in Raleigh this summer is now back in Wake County.

Kendrick Keyanti Gregory appeared before a magistrate in Wake County late Wednesday night following his extradition from New York. He made a second appearance in a Raleigh courtroom Thursday.

The 21-year-old Wake Forest man was arrested in New York City on Sept. 1 during a traffic stop. Authorities there said he was driving a stolen vehicle and cops recovered two guns inside the vehicle.

Gregory is accused of an August crime spree that included the robbery and killing of Mr. Pawn owner Thomas Durand, the rape of a 15-year-old girl, and a robbery and shooting of a man outside a Knight's Inn on Aug. 31st.

He is also accused of committing an armed robbery at the International Foods Grocery store.

"That offense is a Class A felony which carries a maximum possible punishment of the death penalty or life without parole," she said.

As she spoke, a man in the audience wiped away tears, saying he was friends with Durand for 20 years. Outside of the courtroom, friend Stephen McNair said he saw Durand the day he was shot to death.

"There was a woman who came in behind me [at Mr. Pawn] and kind of made the comment [to Durand], 'You're all dressed up. Where you been, to church?' And he said, 'No, I've been to a funeral.' And she said she was sorry about it. And he said, 'Well, at least it wasn't my own funeral.' And then this happened," McNair said through sobs.

One of Durand's customers told ABC11 Thursday he'd like to see Gregory get the death penalty.

"Because he, he took an asset away from a community that needed this resource. That's a big resource that we lost," explained Timothy Hanrahan.

"He (Durand) was like a mentor of the community. Anybody that needed something, he wasn't there for money. You know, he would give money out of his pocket," Hanrahan continued.

"If he had asked for money, Tom would have given it to him. That's just the type of person he was," said Durand's friend Stephen McNair.

Gregory's bond sits at $2.1 million. His mother has told ABC11 that her son has mental issues. She did not attend Thursday's hearing. Contacted by ABC11 Thursday, she declined to comment.