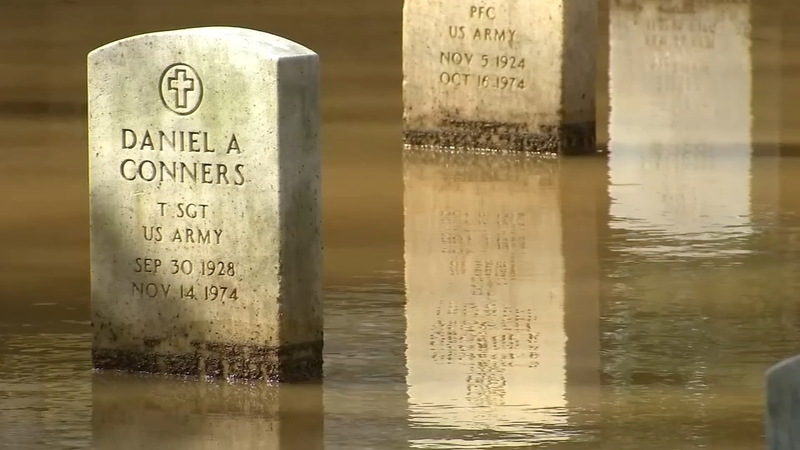 RALEIGH, N.C. (WTVD) -- The southeast corner of the Raleigh National Cemetery is slowly drying out, though there are signs where water once stood.

A week ago, the flooding was extensive in a section of the cemetery and ABC11 found more than four dozen graves peeking out from the water.

Area residents told ABC11 this was not a one-off caused by rain.

One woman, who lives in the East Raleigh neighborhood, said the cemetery, which is maintained by the U.S. Department of Veteran Affairs, is flooded "75 percent of the time."

The VA now says because there's no permanent staff and equipment for the federal property, it's hiring a local contractor to maintain the grounds regularly and keep the graves clear.

There muck now in the Raleigh National Cemetery, but no more flood waters. @DeptVetAffairs is sharing with the me the plan to permanently fix a drainage problem that’s plagued the federal property. Repair contract will be awarded next month. #ABC11 pic.twitter.com/zvulyydOGT

"NCA has sent crews from Salisbury National Cemetery located some two hours away three times since early January to ensure flood waters at Raleigh are pumped out. We are working quickly to enact repairs that are effective for the long term and do not shunt water off cemetery property and onto the property of our neighbors. By modifying our existing grounds maintenance contract, we hope that the response time to address future flooding will be quicker, until such time as the permanent repairs can be made and the flooding eliminated," said National Cemetery Administration Chief of Public Affairs and Outreach Les' A. Melnyk.

The Morris family has an ancestor buried at the cemetery, though not in the section where there's been persistent flooding.

"It's kind of disrespectful to not care about how (those buried here) are treated," said Camarion Morris.

The VA argues there is no long-term damage.

"The gravesites in the section appear uncompromised and there are no sunken graves," said Melnyk.

The VA said a drainage issue is causing the problem.

Melnyk said an investigation last month found pipes were in poor condition, which allowed rocks and dirt to enter into the drain system.

The agency is embarking upon a permanent fix.

A contract will be awarded next month and once the design is complete, construction should start in July. The repair should be finished by September.