Prisoners taken into custody after escaping in Raleigh 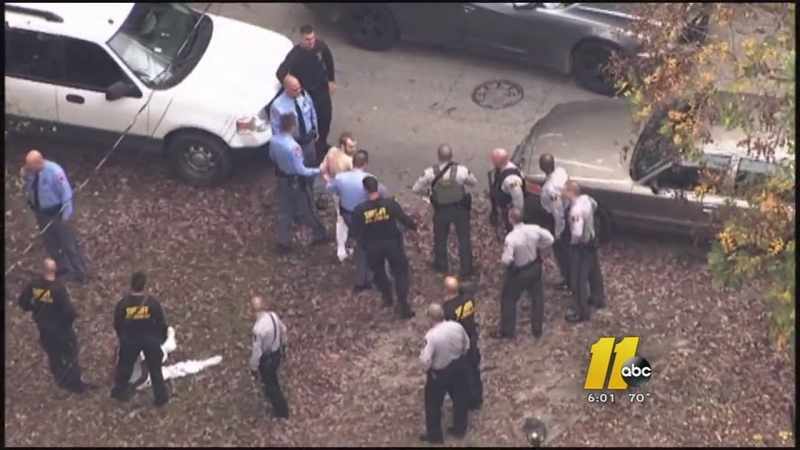 RALEIGH (WTVD) -- Two prisoners who escaped from a transportation van in Raleigh Friday morning, set off a massive manhunt and put nearby schools on lockdown.

Authorities said the men escaped through the back door of the van while it was at a traffic light. Both men were shackled and handcuffed.

Officers said they have not determined how the men were able to get the door open. Other inmates in the van did not try to escape.

Neighbors on Chaney Road told ABC11 that police K-9 dogs started keying in on an area behind a house where there were storage sheds.

"It was funny how they were just patrolling and then all the sudden it just intensified and everybody started to hit the street," resident Bruce Dillard said. "And then you go, 'Nah, it can't be.' I think maybe the reason everybody's coming here is because we got some great garages to hide in. We got storage units, we got garages, we got thick woods - this is a great place to hide. But you still think it will probably happen here."

Images from Chopper11 HD showed the pair after their capture wearing all white and handcuffed while sitting on the ground. Their shackles were not attached.

During the search, Wake County Schools placed Combs Elementary School and Athens Drive High School on code-yellow lockdown as a precaution. The lockdown was lifted shortly after the men's capture.

North Carolina State University also issued a Wolf Alert to notify the campus about the incident.

Long and Dixon were reportedly headed to Central Prison in Raleigh after appearing in court in Lincoln County. Both have extensive criminal records.

Long is considered a habitual felon who has served time for larceny, stolen goods, assault, breaking and entering and other charges.