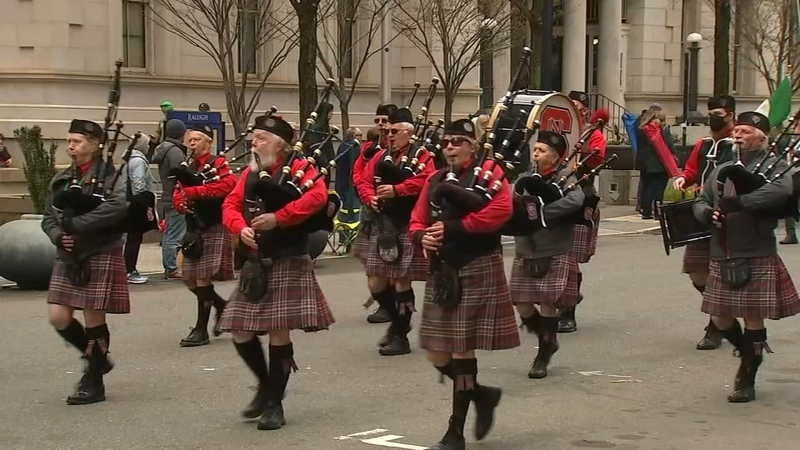 RALEIGH, N.C. (WTVD) -- Overnight intense showers across the area cleared out in time for the return of Raleigh's St. Patrick's Day parade.

Some who arrived early for the best views of the festivities did not mind the overcast skies.

"Well, it would be nice if we had a little more sun. But it's not snowing and it's not raining, so I guess we should be happy," parade fan Vikki Grace said.

But the wind and a temperature drop convinced some to bundle up, especially if they came with kids. Many people at the parade bundled up with green coats, scarfs and hats, because green is the traditional color associated with Ireland.

"These are leftover accessories from years on end," fan Sophie Hansen said.

"Recycled every year. Hat, and my feather boa is a staple," said Mary Kay Clifford.

"He wore, every St. Patrick's Day, a green moustache. That first St. Patrick's Day in 2019 was six months after he passed away," Mellage said. "And every single gentleman in AOH, the Ancient Order of Hibernia Organization here in Raleigh, all painted their moustaches green... but with everywhere I looked. It was such a sweet homage to him and a surprise to me."