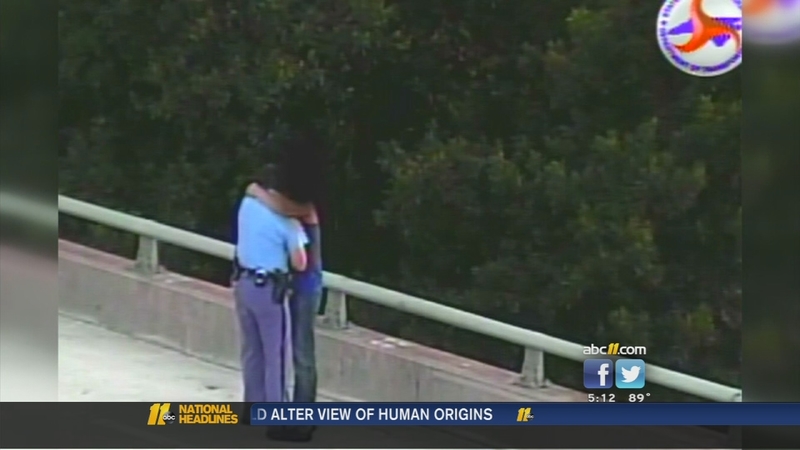 Officer in hug video: 'Just part of the job'

RALEIGH (WTVD) -- Wednesday started off like any other day for Raleigh police officer Dan Hicks. But just after 7 p.m. he was at the Raleigh Police Southwest District Office when he and other officers got the call that a man was sitting over the bridge railing at I440 and Wade Avenue.

Video from a NC DOT camera shows what happened next. Hicks arrived on the scene and was able to talk to the man. Eventually, he agreed to come off the bridge and the video shows Hicks give him a hug.

"I introduced myself by my first name and at that point we were just two people," said Hicks. "In my mind, I had already made the decision that he was coming over to my side of the bridge."

"And thankfully, he took my compassionate statement to say you can come back to the other side of this bridge with me," Hicks continued. "When I was pulling him in tight, the only thing that I said to him was that you're okay and it's over."

Hicks told ABC11 he went home soon afterwards and didn't even think to tell his wife about what happened.

"My wife asked me why I was late coming home I said I had a late call," he recalled.

Why didn't he tell her? He said, to him, it's just part of the job and something any one of us would have done.

"And I hugged him for one of two reasons: It looked like he was in a position where he needed it. And it's okay to give a guy a hug. I really believe that. And the second thing is because I'm the only officer there and, again, I don't know anything about this individual - for his safety and for mine I wanted him close to me. So I pulled him in, gave him a big hug and I think it's what he needed," Hicks explained.

Hicks didn't know that the moment was caught on a DOT camera, that the video aired Wednesday night on ABC11, and was shared by thousands on social media until the next day.

He said he's just glad it ended the way it did.

"He was in a very dire position, and I think he had some very bad thoughts going through his mind about how he felt about himself, but I also think he wanted help," said Hicks.