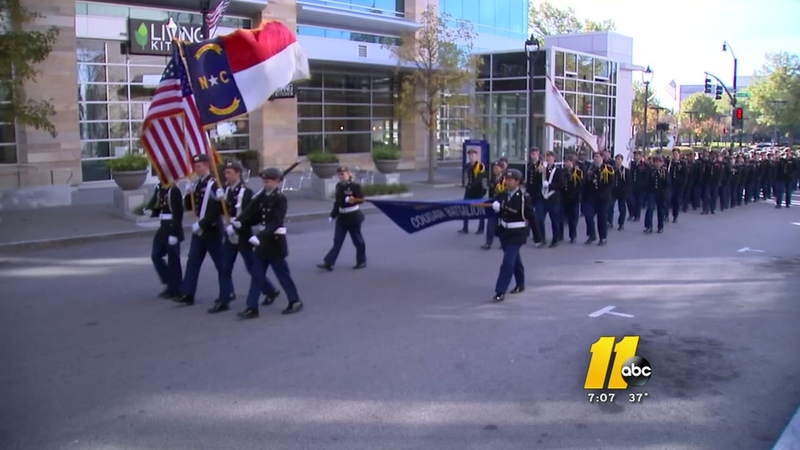 RALEIGH, North Carolina (WTVD) -- The annual Veterans Day parade rolled through Raleigh on a blustery, bone-chilling Saturday. Cold windy weather could be the reason for a smaller than expected crowd, but those who stood and cheered also warmed the hearts of the men and women in uniform.

Retired Army Reserve Brigadier General, Mike Warmack smiled while telling ABC11 about how proud he was "To see all the veterans from past wars, one big family."

"As we know, freedom is not free," Warmack said. "Home of the free because of the brave, and it's because of these people out here. It's a great honor to respect our older veterans, from World War 2 and Vietnam."

Anna Martin of the USO echoed Warmack's praise for the men and women who assembled in Raleigh for the parade.

"It's always important to be appreciated, to know that you've done a good job and your community is behind you," she said.

Wake County Veterans Services director, Dougie Johnson had this advice for those people:

"If you live next to an elderly veteran, one of the little things (they'll appreciate) may be next time you go to the store, asking that veteran if he has enough food in the house. Maybe cutting their grass or something like that every once in a while. Those little things mean a lot to veterans."
Report a correction or typo
Related topics:
community & eventsraleighparadeveterans daynorth carolina newsveteran
Copyright © 2022 WTVD-TV. All Rights Reserved.
TOP STORIES
Clayton police arrest man in shooting that injured 1
Biden: US would intervene with military to defend Taiwan
Wake County begins giving COVID booster shots for children ages 5-11
Biden: Monkeypox threat doesn't rise to level of COVID-19
Pfizer: COVID vaccine for kids 6 months to 5 years old 80% effective
Texas woman sought in fatal shooting of pro cyclist: US Marshals
Zibanejad leads Rangers to 3-1 win over Hurricanes in Game 3
Show More
Russian sentenced to life in Ukraine's 1st war crimes trial
1 person in hospital after a pedestrian was hit crossing I-95
Event for Ukraine raises money for paramedics on frontlines
78,000 pounds of infant formula arrives in US
Barber attempts to cut concerns about violence in Durham
More TOP STORIES News