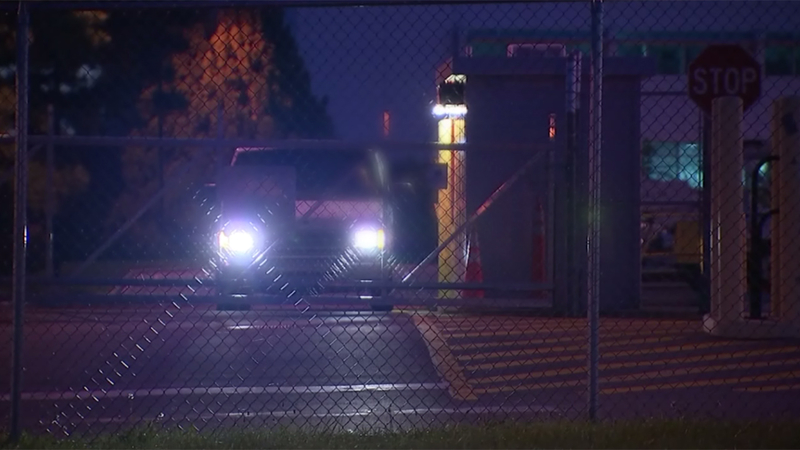 RALEIGH (WTVD) -- This week, many of you and your loved ones will be in long lines at the RDU Airport as tens of thousands of people travel for Thanksgiving which brings airport security top of mind. So, when we got a tip from an ABC11 viewer about airport security, the I-Team investigated. We want to assure you, as soon as we verified the tip, we brought it directly to the attention of RDU authorities and TSA. Our report comes almost two weeks after our discovery.

The TSA spends $7.4 billion a year securing the nation's airports, insisting we take-off our shoes and belts, have our bodies x-rayed and dump-out bottled water before getting on a plane.

But the I-Team discovered, on the other side of the airport, trucks and vans driven by vendors, contractors and airline workers, are able to get access to airplanes without getting their contents checked at the entrance gate.

The I-Team was at RDU Airport at 6 a.m. one morning two weeks ago watching the entry gate which allows direct access to the secure area of the tarmac and the airplanes.

We watched as a white van pulled up to the gate. The driver showed a guard his ID badge, the gate opened, and then the van drove into the secure area of the airport. The guard never checked to see what was inside the van. This is one of many entrance gates at RDU and we are not disclosing its location.

"I think you pointed out a serious gap that needs to be addressed," said Frank Perry, the Secretary of Public Safety and the state's Homeland Security Advisor.

"This particular finding is disturbing. And it's troubling as a citizen, as a traveler, and as someone in law enforcement and connected with homeland security."

We also took our findings to John Cohen, a former high-ranking counter-terrorism official in the Department of Homeland Security and a current analyst for ABC News.

"No one should have the ability to carry items from outside the airport, inside the secure area or on to the tarmac, without those items being screened," said Cohen, a former Undersecretary for the Department of Homeland Security.

"We need to ensure that there aren't explosives or other dangerous items on that truck, being loaded onto an airplane," Cohen pointed out.

The I-Team also found other vehicles entering the secure-area in the same way as the white van. There were airline vans and a baggage truck driving in off public streets without anyone checking to see what's inside the vehicles.

"At a minimum, incoming vehicles should be evaluated by explosive detection dogs," Cohen stressed.

The TSA refused to tell the I-Team about its inspection policy for vehicles entering a secure area.

But we did speak to the former deputy administrator at the TSA, John Halinski.

He says the TSA "standard" calls for the interior of all vehicles to be inspected before entering the secure area and he says an airport can conduct that inspection at a warehouse outside the security gate as long as the vehicle drives directly to the security entrance.

But John Cohen thinks vehicles entering off a public street must be inspected at the security gate.

"I think we need to do more and put in place the technologies and the security resources so that any item coming outside the airport is physically screened."

The workers driving those vehicles are required to undergo a TSA background check and have what's called a SIDA badge -- Secure Identification Display Area.

But, the I-Team discovered reason for concern.

We obtained a government investigative report from June revealing the TSA background check failed to identify 73 people with connections to terrorism, people "employed by major airlines, airport vendors and other employers".

"Our current methods of vetting airport employees does not take into account that someone with an airport credential who was fine when they were originally assessed may become radicalized to the point of violence," he said.

We took the findings of our I-Team investigation to the RDU Airport Authority twelve days ago to give them time to improve security before broadcasting our story.

The airport authority would not respond to questions about our findings... but they gave us a statement saying:


TSA policy prohibits the airport authority and the TSA from disclosing possible changes they made in the wake of our investigation.

For all the time and money the TSA is focusing on passengers, John Cohen says the findings of our I-Team investigation prove more should be done.

"We can lock the front door, but if we keep the back door of the airport open, that airport is still vulnerable."

We also took the findings of our investigation to Senator Richard Burr.

As the chairman of the Senate Intelligence Committee, he has been getting briefings on the ISIS threat.

In a statement to ABC11, he said: "We know that terror groups are on the rise, and attacking America is a priority for them. These groups are increasing in scope and sophistication every day and I cannot overstate the importance of adhering to guidelines that we know prevent attacks. Too much is at risk".