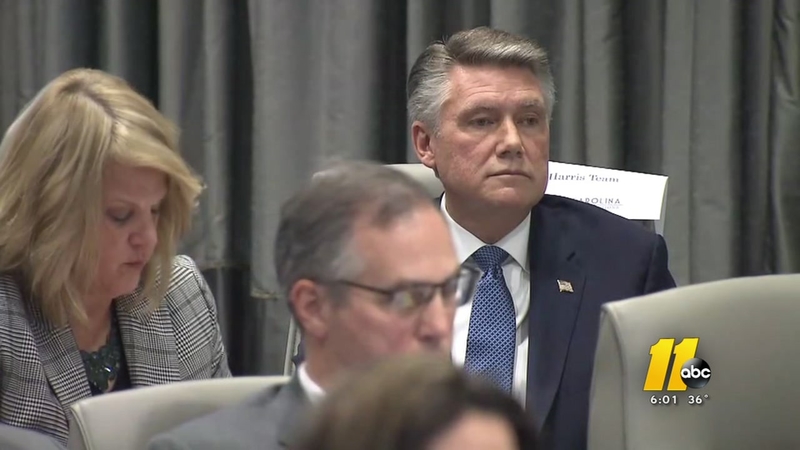 RALEIGH, N.C. -- Explosive testimony Wednesday brought a son to the stand to say he warned his father about potential problems with absentee ballots in Bladen County

That son was John Harris. He says he told Mark Harris during the 2016 Republican primary that the absentee votes in Bladen County didn't add up or make sense.

The testimony came on the third day of a North Carolina Board of Elections hearing about possible election fraud in the state's 9th Congressional District.

A specific warning he gave his father was that the absentee ballots could come back to haunt him in a close race.

Still, the testimony runs counter to the story told by Mark Harris for months--namely that he was blindsided by Dowless' conduct

What remains unclear is how much that revelation is going to matter to the Board of Elections. That's because the board needs to determine if the fraud would add up to more than 900 votes--which is Harris' current margin of victory.

Earlier in the day, political consultant Andy Yates continued his testimony from Tuesday.

Testimony continued to shed light on the scope of the absentee ballot scheme and what kind of impact, if any, it had on the race. That impact is what the North Carolina Board of Elections will have to evaluate.

The man at the center of the investigation, McCrae Dowless, refused to testify. Dowless is accused of spearheading the absentee ballot scheme.

Yates maintains that he had no idea that Dowless was paying thousands of dollars to people to illegally collect and submit absentee ballots.

Yates also said Dowless' election fraud wouldn't have made a difference in the outcome of the election.

Make that 7 hrs on the stand for Yates. Questions coming from attys for candidates on down-ballot races too. Testimony consistent: didn’t know what #McCraeDowless was up to, no written contract, only aware of charges related to divorce. @ABC11_WTVD @JTHVerhovek @ABCPolitics #NC09

See a summary of Tuesday's hearing below.

Disarray in the administration of the country's last undecided congressional election was illustrated Tuesday when three poll workers testified some votes were counted days ahead of Election Day.

North Carolina's State Board of Elections heard the testimony as part of a hearing that could result in either a new election being called for the 9th District or the Republican candidate being declared the winner.
The testimony came a day after the board heard evidence the election was also marred by falsified signatures, disappearing documents, and blank ballots that were filled in by people hired by the Republican candidate.

NEW: Yates said he looked up #McCraeDowless on Google, and heard from @MarkHarrisNC9 that Dowless had “small criminal activities” related to a divorce 20 years ago. Yates says he “didn’t feel reason” to order criminal background check. @ABC11_WTVD @ABCPolitics @JTHVerhovek #NC09

The board heard Tuesday from Bladen County poll workers who admitted tallying results on the Saturday before Election Day when early, in-person voting ended.

In strongest statement of the day, Yates lashes out at Dowless & promises he would’ve fired him immediately. “I would not have put up with that crap.” Adds “I’m deeply disturbed” by what happened. @ABC11_WTVD @ABCPolitics @JTHVerhovek #NC09 #NCPOL

That's contrary to proper practice. The poll workers, Agnes Willis and Coy Mitchell Edwards, said that while they and others could see who had the early lead in Bladen County sheriff's race, they didn't tell anyone.

That testimony contradicted the account of another poll worker, Michele Maultsby, who said earlier Tuesday that she never saw anyone view the tape listing the voting results that Saturday. Agnes Willis must have made an honest mistake when she said people saw the early voting totals, Maultsby said.

READ MORE: Coverage from Monday, the opening day of the hearing
State elections director Kim Strach said investigators didn't find evidence that anyone else was tipped off early about the vote totals. But the practice of early counting raises questions about the vulnerability of the county's voting results.

Whatever the outcome of this @NCSBE hearing, it’s a fair conclusion all 100 NC counties should expect sweeping recommendations for more poll worker training & stricter security protocols. You think NC is under nat’l spotlight now? Wait till 2020. @ABC11_WTVD @JTHVerhovek #nc09

After the hearing ends, the state board will have to decide whether ballot fraud was unfortunate but tolerable, or whether to order a new election in the congressional district that runs from Charlotte through several counties to the east.

The operative, Leslie McCrae Dowless Jr., was called to testify Monday, but his attorney refused to put him on the stand without legal protection against prosecution for events he described. The board refused.

The first of what could be a days-long hearing produced Dowless' workers testifying that they sometimes filled in votes on unfinished, unsealed mail-in ballots. But there was scant evidence that Harris knew about it or even benefited.
Harris narrowly leads Democrat Dan McCready in unofficial results. But the race wasn't certified in November after rumors of Dowless' operation focusing on mail-in ballots. The elections board is expected to either declare a winner or order a new election after the hearing.
Dowless was hired to produce votes for Harris and Bladen County Sheriff Jim McVicker, but his methods last year included paying people to visit potential voters who had received absentee ballots and getting them to hand over those ballots, whether completed or not, Dowless worker Lisa Britt testified Monday.

It's illegal in North Carolina for anyone other than a guardian or close family member to handle a voter's ballot because of the risk that it could be altered before being counted.

Britt testified she collected about three dozen sometimes unfinished ballots and handed them to Dowless, who kept them at his home and office for days or longer before they were turned in, said Britt, whose mother was formerly married to Dowless.

While the congressional and sheriff's races were almost always marked by voters who turned in unsealed ballots, Britt said she would fill in down-ballot local races - favoring Republicans - to prevent local elections board workers from suspecting Dowless' activities.

Dowless paid local people like Britt $125 for every 50 mail-in ballots they collected in Bladen and Robeson counties and turned in to him, Strach said.

Four of the five members on the elections board - composed of three Democrats and two Republicans - would need to agree a new election is necessary.