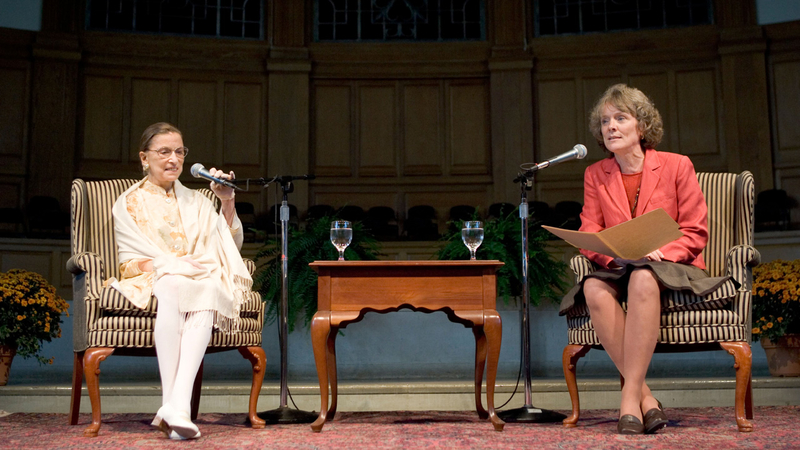 RALEIGH, N.C. (WTVD) -- She died in Washington D.C., but the death of Supreme Court Justice Ruth Bader Ginsburg was felt across the nation Friday, including here in North Carolina

It was nearly a year ago when the Supreme Court Justice made her last stop to the Triangle at Duke Energy Center's Meymandi Hall where hundreds gathered to hear Ginsburg speak, a majority of them being Meredith College students.

"The country has lost a fervent icon of equal rights in the death of Justice Ruth Bader Ginsburg," Gov. Roy Cooper wrote shortly after the news broke. "A legal pioneer for women's rights who insisted on fair treatment for all. Our hearts are with her family and her fellow justices on the Supreme Court. The Court must continue her legacy of justice and fairness."

Cooper has since called for all United States and North Carolina flags to be lowered to half-staff in honor of Ginsburg.

"Justice Ruth Bader Ginsburg was a pioneer who served our nation with distinction on the Supreme Court for 27 years, serving 23 of those beside her dear friend -- but polar opposite -- Justice Scalia," Sen. Thom Tillis said. "She demonstrated that we can disagree on fundamental issues but remain civil."

READ MORE: What's next for the Supreme Court?

Sen. Richard Burr added: "I am saddened to learn of the passing of Justice Ginsburg. Throughout her life and career, Justice Ginsburg faced many challenges, but never let them serve as setbacks. She was a trailblazer and a tireless advocate for equality and opportunity for all Americans. While she and I may not have agreed on many policy issues, I know her unique voice will be greatly missed by her beloved family, her friends, and her colleagues on the Court."

Democratic Congressman David Price noted Ginsburg distinguished herself in legal arenas well before becoming a member of the Supreme Court.

"Before she served on America's highest court, Ruth Bader Ginsburg charted her own path-breaking career as a spirited and persistent advocate for women's rights," Price said. "Justice Ginsburg not only successfully challenged injustices for herself, but committed her career to ensuring a more equal future for every woman who came after her. On the bench, Justice Ginsburg led with brilliance, integrity, and fortitude. Justice Ginsburg also remained resilient while facing personal obstacles throughout her life such as caring for her seriously ill husband or battling cancer. As an exemplary public servant who looked out for the long-term health of the American people and our democracy, she leaves enormous shoes that won't easily be filled."

I’m crying . How people are paying tribute to the life of Ruth Bader Ginsburg https://t.co/7ekdKIDqtG

The North Carolina Democratic Party also reacted to the news Friday, saying "tonight, we have lost a giant in the struggle for a more fair and equitable America."

In a statement, NCDP Chairman Wayne Goodwin said, in part: "Ruth Bader Ginsburg's life and career were a testament to the very battle for justice and equality in our county. Throughout her legal career, Justice Ginsburg blazed trails and shattered glass ceilings. Her life of public service has fundamentally changed the trajectory of our country for the better, and her commitment to justice serves as an example for all Americans looking to make a difference in this world."

Ginsburg was appointed by President Bill Clinton in 1993. She was 87.

"Rest In Peace, Justice Ginsburg," wrote NC Attorney General Josh Stein. "May the memory of the righteous be a blessing to her family."