For 1st time, 3 Raleigh natives will suit up for an NBA team, hope to pave way for others 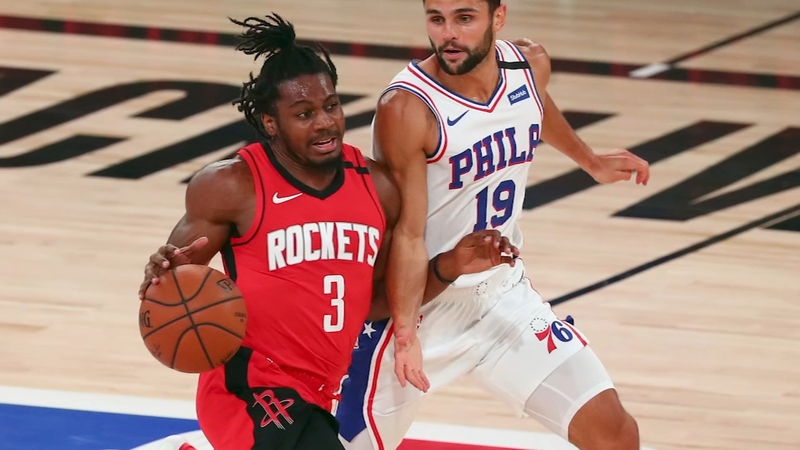 3 Raleigh natives will suit up for Houston Rockets

RALEIGH, N.C. (WTVD) -- When you think of the Triangle and pro basketball, John Wall might be the first name to come to mind, but Friday night, he and two other Raleigh natives will take the court for the Houston Rockets as they open the preseason against the Chicago Bulls.

It will be the first time three Raleigh natives suit up for the same NBA team.

"It's a unique situation," said Millbrook High graduate and former Campbell star Chris Clemons. "Obviously every team doesn't have teammates, at least three of them that are all from the same place and I think it kind of adds a little bit of chemistry between us three and it's definitely a unique experience."

"When you're from Raleigh you know it's a basketball town," Tucker said. "Every kid in Raleigh grows up dreaming to do what we're doing. It's kind of special to have three people from a small area in the country be able to be on the same team. It's pretty cool."

Tucker was drafted in the second round in 2006, Clemons went undrafted in 2019. Wall, the first overall pick in 2010, was recently traded from the Washington Wizards to the Rockets, making the Raleigh milestone possible.

"I think I was back in middle school when John Wall was playing and I was so excited to finally see him play."

Chris Clemons says John Wall was that guy in Raleigh everyone watched growing up - Wall says PJ Tucker was that guy for him. All 3 are now teammates in Houston. pic.twitter.com/zPPvymPHEi

They all have unique stories about making it to the league and all share a common goal of opening the door for the next guy.

"PJ was that guy growing up where I'm from," Wall, who played at Word of God, said. "We're both from Raleigh. He was that guy that everyone looked up to. Going to Enloe High School then going to Texas and then coming to the NBA. We all were excited about that and that kind of gave us a lot of hope especially me being a young kid from North Carolina who was talented but didn't know if I could make it out. To see a guy like that make it out is pretty dope."

Clemons remembers Wall as a must-see guy on the Raleigh basketball scene.

"Raleigh is a huge basketball city," Clemons said. "John Wall definitely one of those that was like a must-see type of guy when you were in Raleigh. I remember, I think I was back in middle school when John Wall was playing and I was so excited to finally see him play because everybody was talking about John Wall this, John Wall that. I was like I got to see this guy play at Word of God."

The trio said having teammates who grew up in the same city adds another layer of chemistry and understanding which can lead to a stronger bond on the court.

"I've known John since I can remember," Tucker said. "He and my little brother are the same age so he was always around. We both grew up in the same place in the Raleigh boys and girls club so it's cool to see my young guy do what he's been doing the last 10 years in the league and continue to show and prove what guys, where we are from, are made of. It's super cool to have him here. He's a great player."

"It'll be unique," Clemons said. "You never know. You never know who you're going to play with and maybe one time we'll be getting on another Zoom call talking about how the next Raleigh guy playing in the league. It's definitely unique and we've got a lot of talent in Raleigh for sure, and we have a lot of guys with potential that have a chance of making it."