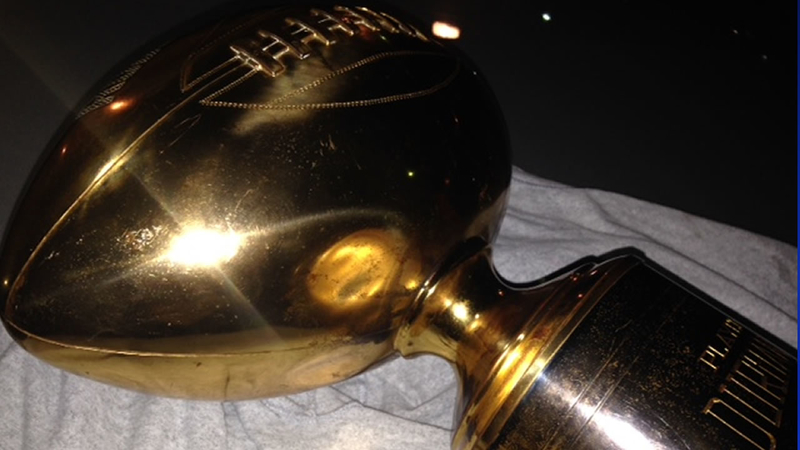 DURHAM (WTVD) -- A junk collector with a possible, rare find is now hoping to make some money while uncovering a lost piece of North Carolina sports history.

A Durham man, who did not want to share his name, believes he has a coach's trophy from the 1942 Rose Bowl game played in Durham at Duke University. This is the only Rose Bowl ever played outside of Pasadena, California.

The Rose Bowl was being planned for its usual home, until Dec. 7, 1941, the day the Japanese attacked Pearl Harbor. The fear of more attacks prompted events on the west coast to be canceled, including the Rose Bowl. Duke University then offered to host the game.

According to Duke University archives, the university oversold the game and had to borrow bleachers from the University of North Carolina in Chapel Hill to make room for the 56,000 fans.

Despite a winning season, Duke lost to Oregon State, 20 to 16, but its coaches were still given trophies. One of those trophies now sits in the North Carolina Museum of History in the North Carolina Sports Hall of Fame. The name on that trophy is E. Hagler. It belonged to Ellis Hagler, the assistant coach to Wallace Wade who was the head coach.

"North Carolinians, we have a very rich sports history," said Katie Edwards, with the North Carolina Museum of History.

So when Edwards got a call that a man in Durham may have found another trophy, she was intrigued.

He wouldn't elaborate on how much he paid this man for the trophy, but he knew it was worth it when he saw what it was.

The name engraved on the trophy is E. Cameron. If verified, this could be Eddie Cameron. Cameron was the backfield coach, scout and recruiter under Wade. During this time, Cameron was also the head basketball coach.

Information from Duke University's archives show Cameron then went on to become head coach of the football team after the Rose Bowl. Wade left to enlist and fight in WWII before returning in 1946. Cameron is also credited with being one of the nation's most influential athletic administrators and was the founder of the Atlantic Coast Conference. He died in 1988 at the age of 86.

The Durham collector found the 1942 Rose Bowl trophy four months ago and has been on the hunt for an affordable appraisal ever since. So far, he's been told it would cost $600 just to have the trophy appraised.

Despite being a Duke fan, once he gets that appraisal, the man said the trophy won't stay with him. He believes it could be worth thousands if not more. He plans to give Duke University the first chance to buy it from him, after that he says it'll go the highest bidder.