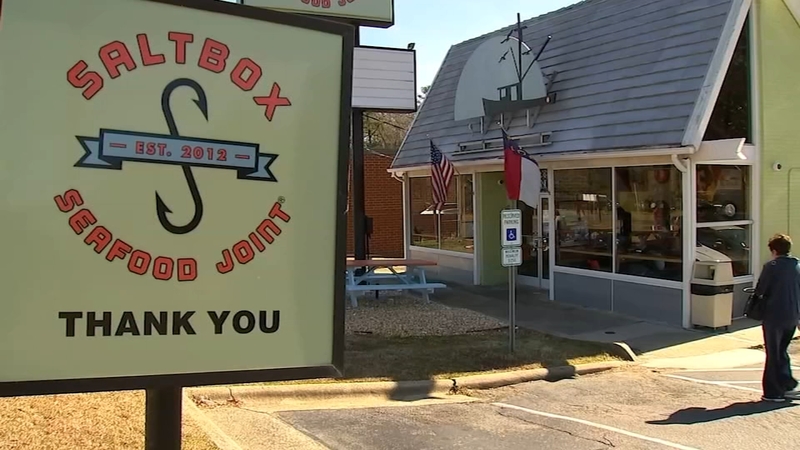 DURHAM, N.C. (WTVD) -- Saltbox Seafood Joint in Durham is celebrating Black History Month for the second year in a row by cooking up special meals each Wednesday in February. James Beard-nominated Chef and owner Ricky Moore says he hopes the dishes spark conversation to help educate people on the global influence of African food.

"From what I like to call a culinary cultural contribution to food, you know, from the African diaspora," Moore explained. "It's very important that people understand the influences, the contributions, the dishes that we all love that you know, you probably didn't think came from a specific region of Africa."

Wednesday, February 2nd - Fried Catfish & Spaghetti: This dish's origins are in the Mississippi Delta and it traveled North during The Great Migration--the decades-long movement of millions of African Americans from the American South to other parts of the U.S.

Wednesday, February 9th - Bake & Shark: This is a popular street and beach food dish that you will find all over Trinidad and Tobago. A lot of African slaves ended up in the Caribbean and this dish was originally developed by African fishermen.

Wednesday, February 16th - Senegalese Fish Yassa: The origin of this dish is Chicken Yassa, a traditional Senegalese dish of chicken smothered in a caramelized onion sauce seasoned with mustard, lemon juice and a bit of heat from fresh chiles served over rice. Popular across West Africa it's origins are from the Casamance region of Senegal and can be found in Senegalese restaurants around the world.

Wednesday, February 23rd - Moqueca Baiana: Moqueca is a fish stew and one of the classics of Brazilian cuisine. There are two versions, one is found in the North and the other in the South, each influenced by the cooking habits/influence of each region. In the North, Moqueca Baiana, has elements of the African culture, while in the Southeast Moqueca Capixaba, is heavily influenced by the Portuguese and Spanish.