Teen girl says officers attacked her, broke her hand for not wearing mask properly at school 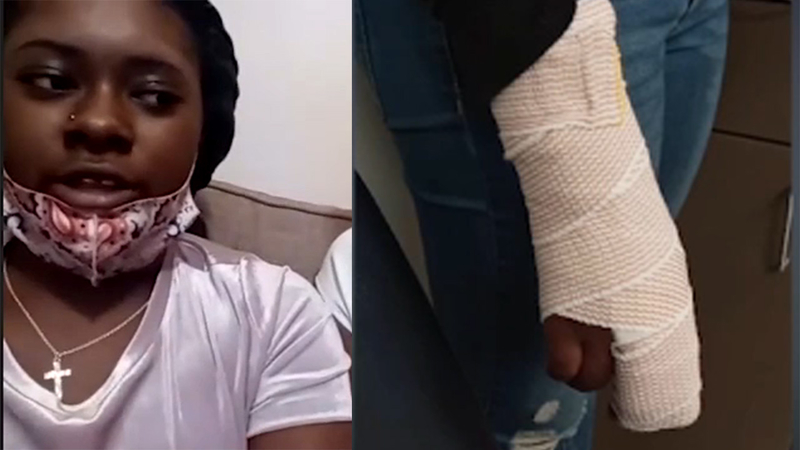 HS student claims she was beaten by officers over face mask

LEAGUE CITY, Texas -- A Texas mother is furious and demanding answers from school officials after her daughter says she was beaten by three officers over a face mask.

Shanna Proctor-Lyons said her daughter suffered a broken hand plus head and knee injuries during the incident.

"I just lost it," she said. "I couldn't understand why my 15-year-old was beaten so badly. They didn't have any reason why."

Her daughter, Kaidence Lyons, said she was walking down the hallway when a school employee yelled at her for not wearing her mask properly.

She said the employee taunted her, chased her down the hall and called her names.

Kaidence was then sent to the principal's office for talking back, though she claims she did not.

She said the employee demeaned her and said, "I don't want to hear nothing. I'm tired of y'all Black kids thinking you can run my school ... I got something for you."

Kaidence then said she was taken into a room where three officers beat her up and placed her in handcuffs.

"They didn't tell me why I was being arrested, handcuffed and slammed down, hitting for different reasons," she said.

The family's lawyer, Ronald Haley, Jr., is now demanding an investigation and asking the district for complete transparency into the incident.

He's also asking for surveillance video leading up to the moment Kaidence was escorted to the private room.

"Why was she brought to a room with no cameras?" asked Haley. "This was supposed to be a safe haven. It seemed very cavalier for her to be walked to that room casually."

"In the Clear Creek Independent School District, we believe each person deserves to be physically and emotionally safe. The school district and the Galveston County Sheriff's Office have both launched separate internal investigations into the events leading up to the arrest of a Clear Creek High School student on Monday, October 19, 2020.

Meanwhile, Kaidence's mother is asking for prayers and hopes the truth will be revealed.