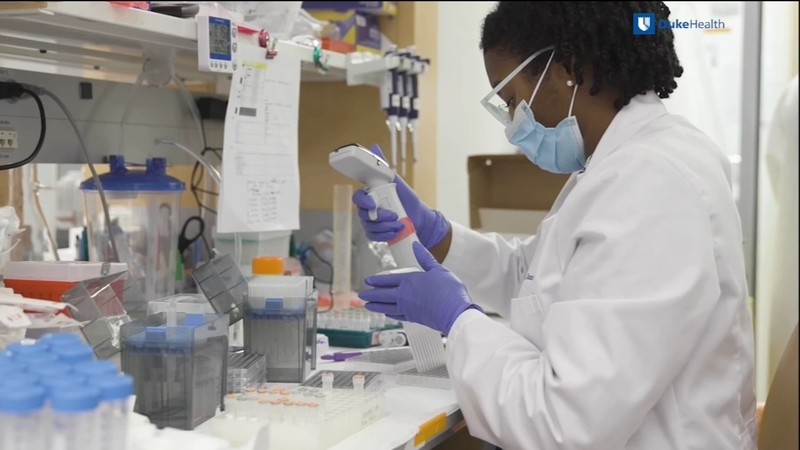 DURHAM, N.C. (WTVD) -- A team of scientists with the Duke Human Vaccine Institute have created a vaccine which showed promising results in animals against the original COVID-19 strain and other variants.

It's called a pan-coronavirus vaccine, and the group of researchers began work last spring.

"We knew that we wouldn't be the first ones to go to the market with a vaccine. We knew that the large companies have the infrastructure and the funding capabilities to do that a lot faster than us. But what we thought we could do is to maybe have an impact in the second wave of vaccines. And these would be vaccines that someone would receive as a boost. So if their initial immune response to the Moderna or Pfizer vaccine was not very high, they could then take this vaccine as an alternative to hopefully boost their response to be a lot higher," said Dr. Kevin Saunders, the Director of Research at the Duke Human Vaccine Institute.

"The mRNA vaccines were already under development, so we were looking for ways to sustain their efficacy once those variants appeared," said senior author Dr. Barton F. Haynes, the Director of the Duke Human Vaccine Institute, in a news release from the university.

Unlike the Pfizer and Moderna vaccines, which use mRNA technology, or the Johnson & Johnson vaccine, which uses viral vectors, the pan-coronavirus vaccine is protein-based.

"We set up a study where we gave the animals mRNA vaccines. And then we can be back and gave them a third immunization of the protein-based vaccine from our study. So we actually modeled what this would look like. We showed that it does improve the immunogenecity and it gave a better immune response," said Dr. Saunders.

Tests on mice and monkeys showed the vaccine provided protection against coronaviruses, with researchers noting that success in primates is typically a strong indicator of similar results in humans.

Health officials have previously expressed concerns over variants potentially impacting vaccine efficacy, especially as vaccination rates in the U.S. have significantly slowed over the past month.

Florida reports more than 10,000 COVID-19 variant cases, surge after spring break
"This approach not only provided protection against SARS-CoV-2, but the antibodies induced by the vaccine also neutralized variants of concern that originated in the United Kingdom, South Africa and Brazil," Dr. Haynes said. "And the induced antibodies reacted with quite a large panel of coronaviruses."

Dr. Saunders said the goal is for the vaccine to be wide-ranging, which means potential future use.

"We know that there's many different coronaviruses that circulate in nature, in different species of animals, and that if any of those viruses were to jump over into humans, we would be back in a very similar position to what we're in currently," said Dr. Saunders.

He acknowledged that there's some educated guesswork in that regard, with doctors using knowledge of viruses in the same family and studying what's common amongst them. From there, they can target those sites, anticipating similarities.

The vaccine was found to create antibodies to neutralize some animal coronaviruses.

Researchers hope to begin a human trial within a year. To read the full report, click here.