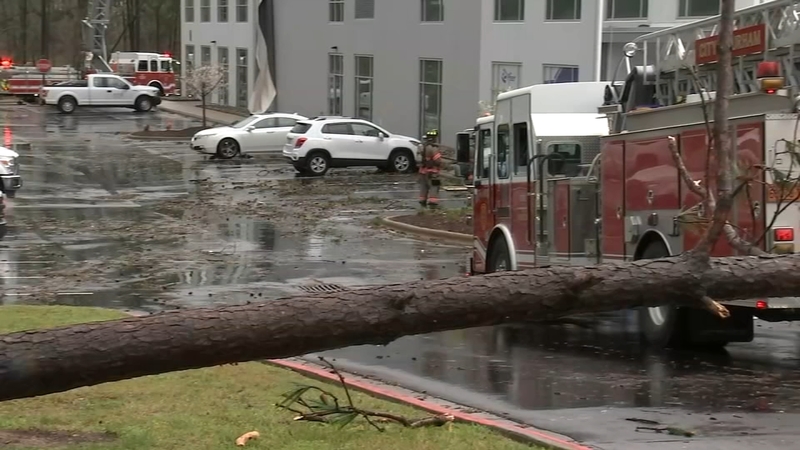 DURHAM, N.C. (WTVD) -- High winds from the severe storm that moved through the Triangle on Thursday caused damage to the new Pfizer building on Shiloh Glenn Drive just west of Raleigh-Durham International Airport

Crews were on the scene surveying the storm damage. It's not yet confirmed whether a tornado touched down in the area.

The National Weather Service plans to investigate on Friday to determine whether the damage was caused by a tornado.

The wind blew "some of the covering off the building," a Durham fire official said.

Winds causing part of the roof to collapse at the Pfizer in Durham. Fire officials says people were inside working at the top, but nobody seriously hurt. #ABC11 pic.twitter.com/hzhFVYZSiy

A large tree also fell in the parking lot as a result of the storm and debris and limbs were scattered about.

The Durham Fire Department said workers were inside the building at the time but nobody was injured.

There was a scare, however, after a gas smell was detected.

"We had a smell of gas inside the building, so what we've done is we sent four crews from the hazmat crew in to measure the building and they've gone through the whole building so everything is clear," said Jim Cole, Durham Fire Division Chief.

The damage at Pfizer wasn't the only evidence of the strong storm that prompted tornado warnings in the Triangle.

A wooden fence rippling over on its side and a massive tree uprooted also bore witness to the afternoon's wild weather.

Ben Eller of Durham was getting tornado alerts on his phone as he was driving.

"It hit like a ton of bricks -- the sound, the vehicle was shaking," Eller said. "It started to lift a little bit, the one side. The semi beside me blocked most of the debris but it was rocking back and forth."

A number of cars crashed on the road. Traffic was shut down on Highway 64.

A crew used cables to right a truck. Another truck, carrying boxes of tomatoes, flipped in Harnett County.