'City put a target on us': Homeless Fayetteville family's SUV ticketed, could be towed 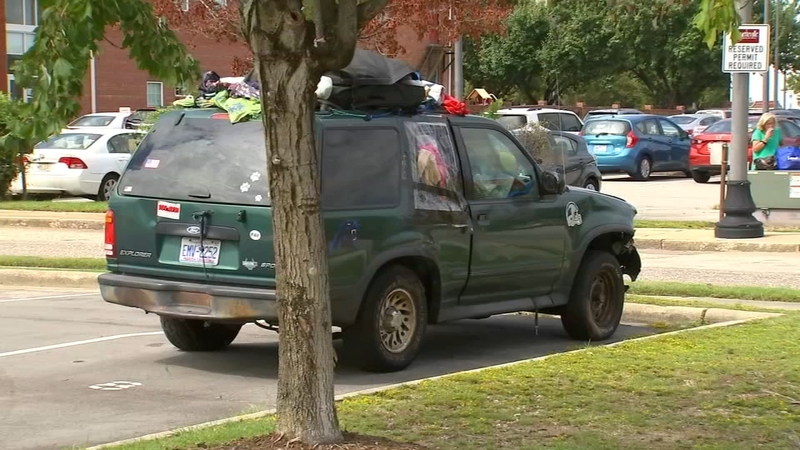 FAYETTEVILLE, N.C. (WTVD) -- A family forced to live in an SUV said they feel targeted after the city ticketed their car and is threatening to tow it.

Meanwhile the mayor telling ABC11 this isn't an attack but part of a larger problem he's working to address.

ABC11 met with Sharman Tober after she reached out to Morgan Norwood once she received a notice about her SUV being towed.

The letter gave her a 9:30 a.m. deadline to address code violations.

The City Code Enforcement said the SUV is a junk car because it doesn't have current license plates.

The notice also called it a health hazard because of the trash.

Sharman, her disabled son Christopher along with their dogs, two of which are service animals, live out of their SUV.

For years, they've parked directly in front of the downtown library.

Sharman claims parking officials told her that because she has a valid handicap sticker, they can't force her to move.

Meanwhile Tober told ABC11 she's questioning the timing on the threats from the city.

With new proposals for bans on street sleeping and shopping carts, she wonders whether there's a target on the homeless.

"It seems like sometimes they just don't care," Tober said.

"The city has the street sleeping ordinance, panhandling, shopping cart thing is in the works as well. They view this as they latest attack on the homeless. What is your response," Norwood asked in a one-on-one with Mayor Mitch Colvin.

"First of all..all of this is unrelated to the other," Colvin replied.
Colvin said this situation spotlights a bigger problem, one he and both city and county leaders have been working together to address.

"We are moving as fast as we can to make sure we can get a day center up and running, we're trying to work with the county commissioners for other support services. I will be bringing to council the idea bout these tiny home communities. There's a role for us to play," Colvin explained.

But as for the Tober's situation, time is running out.