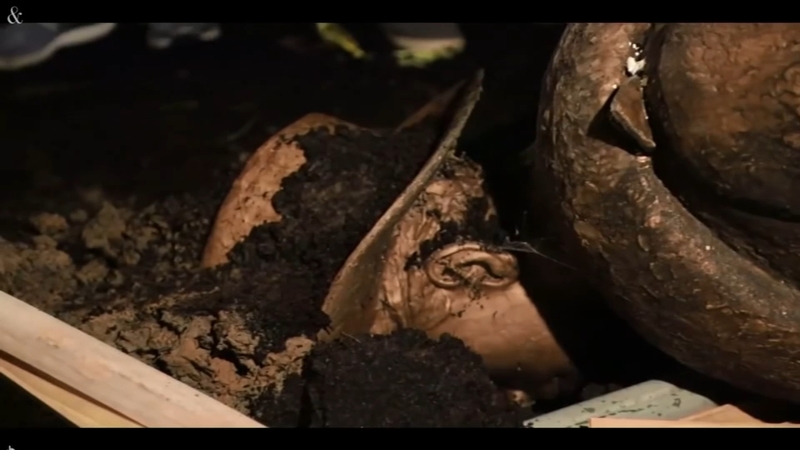 CHAPEL HILL, N.C. (WTVD) -- It was the first day of classes on campus in Chapel Hill. And if you were a Tar Heel first-year student -- you might have no idea Silent Sam was ever here.

Silent Sam was a Confederate statue built in 1913 and dedicated to the UNC students and faculty who left school to fight in the Civil War for the Confederacy.

On August 20, 2018, student protesters toppled Silent Sam, knocking the statue to the ground, kicking it and tossing dirt on top of it.

One year later, students and activists returned to remind everyone of the years-long battle that was waged on McCorkle Place.

Freedom songs on Peace and Justice Plaza as UNC students and activists celebrate the one-year anniversary of the toppling of the Silent Sam Confederate Monument. #abc11 pic.twitter.com/nWZyxkkME9

"We were chanting, we crossed the street and then they put the banners up. Police stepped back and gave us a lot of time to do our work because we made them exhausted," recalled Michelle Brown who spent who spent her UNC undergrad years as one of the vocal leaders of the campaign to get rid of Silent Sam.

Now she's one of many Tar Heel graduates who returned Tuesday to celebrate what she considers one of their movements' greatest achievements -- the statue's toppling.

"(It feels) incredible, mostly because it's a celebration," Brown said. "It's very rare that we come here. Honestly, it's one of the very few times that we've come here to celebrate. So it feels good."

A diverse coalition of students and activists marked the one-year anniversary in a rally at Peace and Justice Plaza. They call themselves 'anti-racists'; who united to bring down the university's monument to UNC alumni who fought for the Confederacy in the Civil War. All along they argued the statue was a symbol of racism and division that had no place on the diverse campus of the state's flagship university.

"I can still hear the shouts of joy, feel the hugs filled with love. And look down at the bronze metal meeting its fate," Activist De'Ivyion Drew told the crowd.

There were some voices of dissent in tonight's crowd. A woman wanted the mic to decry the monuments removal. She was shouted down.

A man carrying a #MAGA (Make America Great Again) stood on the fringes of the rally. Chapel Hill police not far behind to keep the peace.

Then the rally moved to McCorkle place where there is no sign Silent Sam was ever here.

Yet, the monument's ultimate fate remains a mystery.

"I think someone just needs to have the courage to say this is enough. It's basically gone. Why put it back? Why be the first ones to erect a confederate monument in the 2000s," Brown said, framing the argument against any move by UNC leaders to bring Silent Sam back to campus.

On anniversary of #SilentSam toppling we asked about ongoing discussions over what to do with the monument:
“I think someone just needs to have the courage to say enough. It’s basically gone. Why put it back? Why be the first ones to erect a Confederate Monument in the 2000’s?” pic.twitter.com/VJVBUDONRD

The vandalism of the statue resulted in some arrests and convictions, a prolonged debate between university leaders about what to do with the statue, and even the resignation of Chancellor Carol Folt.

Right now, five members of the UNC Board of Governors is tasked with coming up with a solution for what to do with the monument which is being stored in an undisclosed location. But the group does not have a deadline.