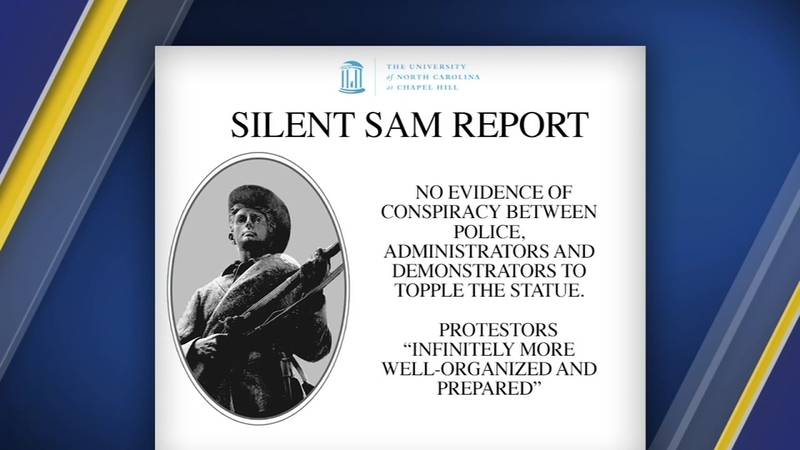 CHAPEL HILL, N.C. (WTVD) -- In the chaos of Aug. 20 in Chapel Hill, Heather Redding didn't help tear the Confederate monument down at UNC, but she was there in support of the anti-Silent Sam demonstrators who did.

"And there was this build up of intensity and I think everyone sensed that something big was going to happen," Redding said.

On Friday night ABC11 spoke to Redding, which was hours after UNC's Board of Governors released a 64-page After-Action Report that was prepared by an independent law firm.

The report found no evidence of a conspiracy between police, administrators, and demonstrators to topple the statue, but, it said protestors were "infinitely more well-organized and prepared."

UNC campus police weren't just under-prepared, they were also outnumbered, according to the report.

"It certainly looked like the police stepped aside," Redding said describing the moment police "pulled out," allowing demonstrators to move in on the statue. The report said the officers feared for their safety.

No more than 28 officers were there to handle a crowd of protestors estimated to be as large as 200 to 350. The report called it, "difficult if not impossible to protect the monument."

It said Folt had misgivings about installing protective barricades around Silent Sam but left the ultimate decision to police.
But, the campus safety director said Folt said no to barricades for fear of what it would look like to parents and students returning to campus.

The report said several officers were "uncomfortable" with the decision.

"If they have to spend so much time on the policing tactics suggests that the university itself was fundamentally flawed in allowing Silent Sam to stay up for so long," Redding added.

Carol Folt was forced out of her post this week by the Board of Governors after unilaterally ordering the removal of the monument's stone base.

"Not everybody has to agree with what people do, but I did what I thought was best, and I'm at peace with that," Folt told the Board of Trustees on her last day on the job this past Thursday.