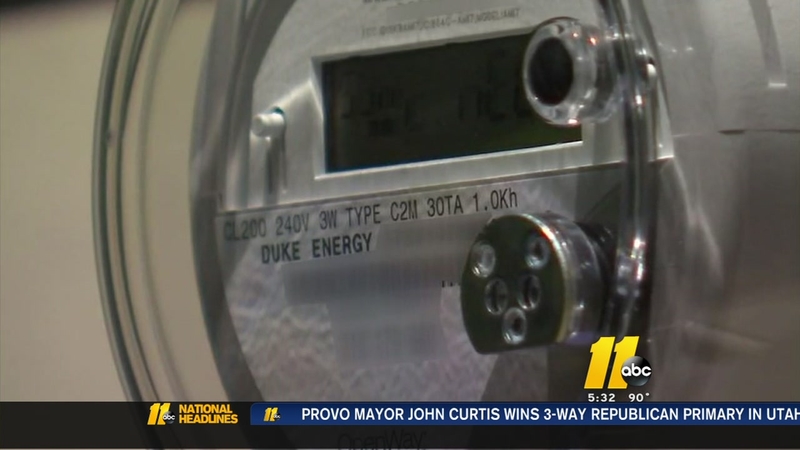 Gene Astorino and his wife, Dawn, built their home in Harrington Grove more than 20 years ago. After having the new smart meters installed, the Astorino family has noticed several electronic items malfunctioning. Specifically, their dryer and big-screen television.

Gene, who works from home, said someone from Duke Energy showed up to his home last week and said his smart meter was going to be replaced. He told ABC11 the DE crew spent less than five minutes at the home. Soon after crew left, Gene said his dryer and TV began to malfunction.

Referring to the family's dryer, Gene said, "Just yesterday, the repairman finally got here and said it's your electronic board. So it's sort of coincidental that two things ironically went out since this happened."

The Astorinos now have to replace the family dryer.

"The TV, we haven't even started (to fix), because we know that's going to be a pretty penny."

According to Duke Energy, the new smart meters are said to give the energy company remote access to read meters, enable customers to have better control of their energy use, and result in fewer estimated bills.

Raleigh resident Frank McNally has Duke Energy Progress. Since a DE crew visited his home last week, the family has had two short power outages at their home. McNally said he is at the point where, "if we have any kind of issues at all, even a power flicker ... we're definitely going to call them and let them know.

Duke Energy sent ABC11 a statement that reads: "We have not had any reports of this issue happening with our AMI installations. We do encourage any customers having power issues to contact Duke Energy so that we're able to look into the issue and resolve it."

After our inquiry into these smart meters, Duke Energy decided to look into the issue and sent the following response:

"At each of the locations, we inspected the meters and found no issues with the new meters, and the voltage level was good. Our site visits also showed there was no damage or issues caused by the meter exchange. As background, there is no electricity surge when the new meter is installed - it's a circuit and power flows like turning on a light switch in the house.

The one-time flickering was more than likely caused by a branch or something on the power line. This would not have been a meter issue.

As I mentioned before, we do encourage our customers to contact us if they have any issues with their power service and we will look into it for them."
Report a correction or typo
Related topics:
home & gardenraleighwake countyduke energyraleigh newsconsumer concerns
Copyright © 2022 WTVD-TV. All Rights Reserved.
TOP STORIES
A motorcycle's unforgettable ride back home
Trees downed, power outages reported after powerful overnight storm
Record-breaking heat today for Triangle
Driver struggles to get permanent tags for truck bought on Vroom
American Airlines flight veers off runway in Charlotte
Our America: Because I Am | Full episode
Officials remain optimistic as tourism in Wake County booms
Show More
NC State's Tommy White breaks ACC freshman home run record
Violent crime in Durham up 8% during first few months of 2022
Funerals begin for victims of Buffalo supermarket shooting
Decrease in home sales predicted nationwide but NC housing market hot
NY high court to determine if Bronx Zoo elephant is a person
More TOP STORIES News