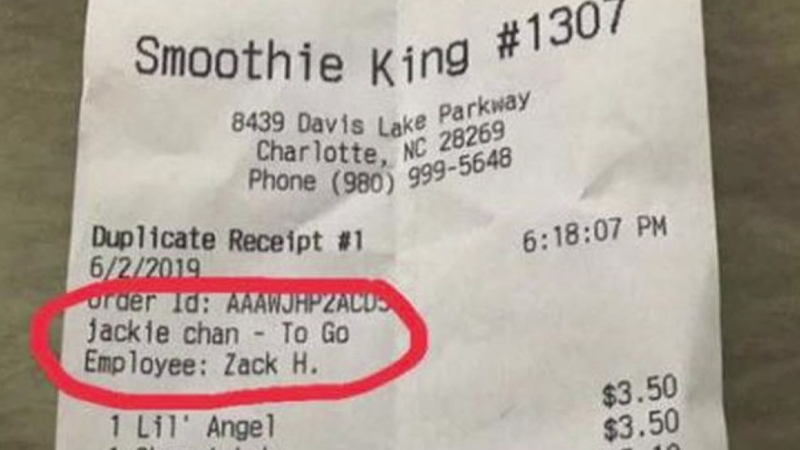 Calvin Caldwell told WSOC he couldn't believe his eyes when he saw the N word printed on his receipt after visiting the store on Holly Huntersville Road.

Choi, who is Korean, posted about the incident to Facebook.

His message read in part, "...the 3 employees working there at the time couldn't stop laughing about it. I experience racism here and there and usually doesn't bother me. Today I left this store furious on the inside, trying to not let my young kids know what just happened."

Smoothie King fired two employees believed to be involved. The company said the entire staff at both stores will undergo sensitivity training.

"Today, two instances happened in our Charlotte franchise stores that are totally unacceptable and go against every value that we stand for. Two of our team members wrote inappropriate, racial remarks about our guests. We have zero tolerance for any action where a guest is disrespected, and we have taken immediate and decisive action. As of tonight, both team members involved have been terminated. Both stores will be closed until the franchisees and their respective teams complete further training on our standards and to ensure that nothing like this occurs again. Additionally, we are continuing our investigation to insure that any individuals involved in these situations have been terminated. This behavior does not in any way reflect our company's commitment to creating an open and welcoming environment, and for that we sincerely apologize. Our senior management team is taking additional steps to reinforce and retrain all of our franchisee and store-level employees of our inclusivity policies and best practices."
Report a correction or typo
Related topics:
charlotteracismrestaurantcharlotte news
TOP STORIES
Police looking for Johnston County man in Fayetteville double homicide
Shaw University rolls out plan to redevelop downtown Raleigh campus
Raleigh Fire, Police warn of looming problems without major pay raises
Baby giraffe fitted with orthotic at San Diego Zoo Safari Park
NC Primary Election: What to know before you vote
Baby formula maker Abbott says agreement reached to reopen plant
Cumberland County mom on mission to help other moms with infant needs
Show More
What we know about the victims of the Buffalo shooting
You can now order 3rd round of free at-home COVID-19 tests
NCCU law analyst: 'Replacement theory' driving increased hate crimes
Hamlin, Jordan team wins second NASCAR race
Reward offered for information on endangered red wolf death
More TOP STORIES News