Winter warm up: When will it all melt? 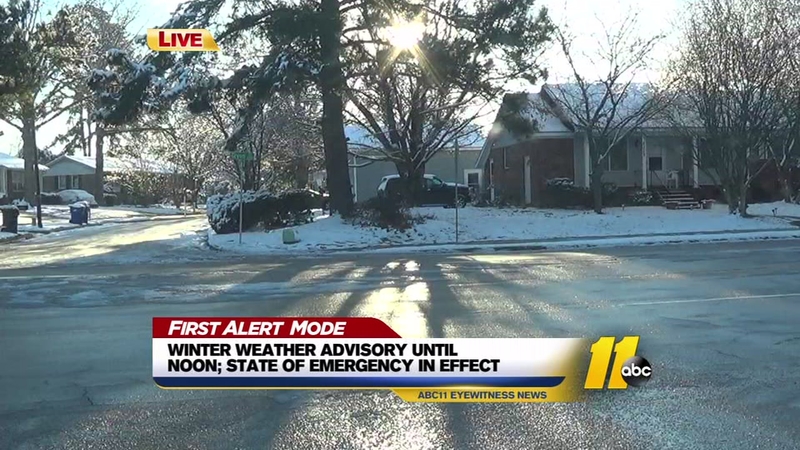 Temperatures will warm up this weekend

State officials are asking people to take their time on roadways as some may still be unsafe for travel.

While most main roads have been cleared, many secondary roads are still snow-covered, causing state officials to urge people to stay off of them.

NCDOT crews are working to remove snow and slush from streets; however, they should also clear up as temperatures increase Friday afternoon.

It will be sunny Friday through the weekend. Highs will be 48 Friday, 50s to near 60 over the weekend.

But as the Triad starts to thaw, there may be some good news for non-snow lovers on the horizon.

Big Weather said the rest of January should be warmer than normal, adding that we shouldn't see snow again until February.

Snow from Wednesday's storm did refreeze, becoming an icy mess for commuters Thursday night and Friday.

Multiple wrecks were reported Friday morning, including a deadly crash on I-40 in Raleigh.

REAS MORE: 2 killed, 2 injured in head-on crash on I-40 W near Wade Avenue in Raleigh

Because of the ongoing threat of bad conditions, most school districts, including Wake and Durham, closed Thursday and Friday.

Crews with the NCDOT worked through Thursday night monitoring roadways and laying salt.

Many areas in the Triangle-area saw as much as 6 to 10 inches of snow accumulate.

The largest accumulations were from the northwest of Raleigh including Durham, Orange, Person, and Chatham counties. Snow totals for most of the area were more than expected. About 11 inches fell in parts of Durham, Chatham County saw 12 inches, and Raleigh saw around 5.

The snow is also breaking records. A record 5 inches of snow fell at Raleigh-Durham International Airport on Wednesday, breaking the old record of 4 inches set in 1946.

Governor Cooper issued a State of Emergency ahead of the winter weather Tuesday afternoon.

On Friday, Cooper thanked most North Carolinians for stay off of roadways during the storm.

At a briefing Thursday afternoon, Cooper said a little more than 30,000 homes and businesses were without power, many in Chatham County.

By Friday afternoon, that number had been cut down to around 200.

State troopers had responded to more than 3, 200collisions, and more than 5,362 calls for service by Friday afternoon.