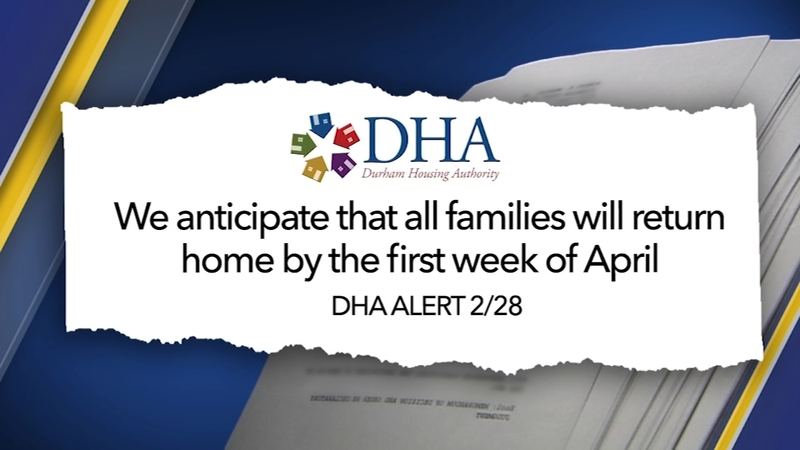 DURHAM, N.C. (WTVD) -- The Durham Housing Authority (DHA) sent word Friday to the hundreds of displaced residents at the beleaguered McDougald Terrace housing complex that their already weeks-long wait is far from over. DHA says it now hopes to return all families home by the first week of April.

It was a rainy night in early January when ABC11 first met Brittany Lee. We were the first ones to tell her the carbon monoxide crisis at McDougald had hit a whole new level; she and hundreds of her neighbors were being asked to evacuate.

Friday's news stretching the evacuation until April did not sit well with Lee.

"Frustrated; I'm pretty sure nobody wants to be in a hotel," Lee said.

Lee is the mother of a 6-year-old son. She's 8 months pregnant. And for the ninth consecutive week, her family will be crammed inside a two-bed Durham hotel room - six miles from home but far away from normal.

"I'm just taking it one day at a time and praying for better days - that something good will come out of this," Lee said.

In an update two weeks ago from DHA, CEO Anthony Scott told reporters that repair work to replace appliances and ventilation, which were leaking carbon monoxide, was taking longer than expected.

"(DHA) sent an alert today saying that hopefully everybody will be moved back in the first week of April," Lee said. When we asked Lee if she believed it, she replied, "No... You're trying to cram decades of work into like three, four months of time. I'm just being realistic."

ABC11's requests for the newest data from DHA on how many families have been allowed to return so far and how many remain in hotels went unanswered on Friday.

In its alert, the housing authority did announce that all displaced tenants along with those who've returned or never left will be exempt from paying March rent.