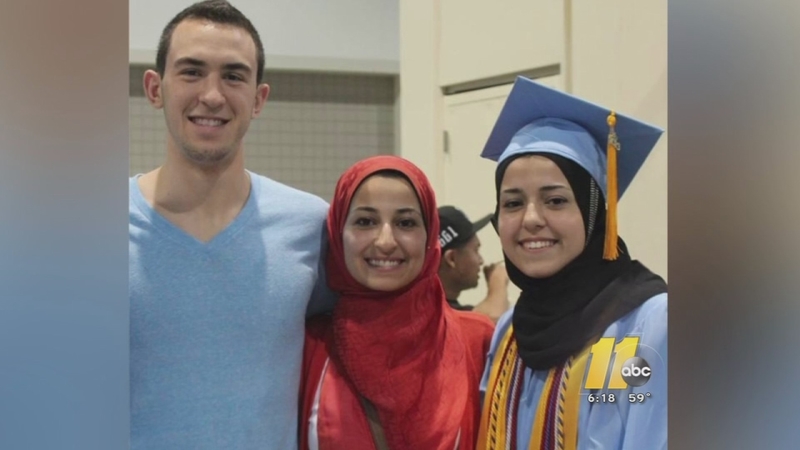 CHAPEL HILL, N.C. (WTVD) -- A new store opened its doors in Raleigh Tuesday. My Deah's Goodwill Store serves as a tribute to the memory and work of Deah Barakat, his wife Yusor Abu-Salha, and her sister Razan Abu-Salha. The trio were shot to death in February at a Chapel Hill condominium complex.

The murders of the three young Muslim students not only sent shock waves through North Carolina, it was a tragedy felt across the nation. Now, their legacy will live on in a store that provides help to refugees, Muslim youth, and people in need.

Barakat was known as someone who loved to help others. At the time of his death, the UNC dental student was planning a trip to Turkey to provide dental care for refugees. But the Chapel Hill murders caused many Muslims in America to take a look at the youth here at home.

"There's been a movement since the murders in February to have, you know, to really understand the value of our youth in this country," explained Deah's brother Farris Barakat.

That inspired Zerqa Abid to begin My Project USA. The Ohio-based nonprofit works to better the lives of American Muslim youth.

"What My Project USA is doing is something that literally nobody is doing, really investing and making sure that each and every one of our youth becomes a loyal, productive American citizen," said Abid.

At the same time, Deah's father Namee Barakat wanted to start a store that would serve North Carolina's refugee population. The two combined their ideas and the result is "My Deah's Goodwill Store.

"This is a huge part of keeping their legacy alive," said Namee Barakat. "It's a huge part of what they were about, you know, Deah was about service helping others and giving and this that's what this project is all about."

The idea is simple. The public donates goods, the store sells items to refugees and those in need, and the money raised goes to support My Project USA.

"The hope that my dad had with the store was to sustainably try to help refugees," said Farris Barakat.

And in return it will sustain the legacy of Deah Barakat. Farris said Tuesday it's been a long and hard road for his family and it doesn't get any easier. He said they are anxiously anticipating the trial of the man accused of killing his brother and the two women.

Craig Stephen Hicks is charged with three counts of first-degree murder in what investigators say was a long-simmering dispute over parking spaces at the Finley Forest Condominiums in the 200 block of Summerwalk Circle in - east of the University of North Carolina at Chapel Hill Campus. The complex is home to many UNC graduate students.

The families of the victims have said they believe it was a hate crime. Tuesday, they said when the trial comes they are not looking forward to reliving the pain of last February, but they hope the new store will be able to provide a positive way to remember their loved ones.